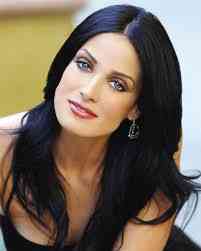 An early Christmas gift that surprised and delighted us last Dec. 1 was the “breaking” news that Dayanara Torres has agreed to make a big, bright comeback to the Philippine entertainment scene!

The former Miss Universe from Puerto Rico starred in many local TV-film productions here in the late ’90s, and apparently loved the experience so much that she wants to give it another go, despite her subsequent success in US and Latin American entertainment.

Reports have it that Dayanara will be relaunching her stellar “brand” here under the auspices of Gary Valenciano, her costar in the Star Cinema film, “Hataw Na.”

He shares her Puerto Rican roots by way of his mother, Grimi Valenciano, a lovely and gifted actress in her own right in local Spanish theater productions, which we recall having enjoyed years ago.

We hope that Dayanara’s first comeback vehicle will be a big film production, because there’s nothing like a movie on the silver screen to excite viewers and make a stellar comeback an appropriately major event.

We hope, too, that Dayanara’s “reintroduction” to local audiences will costar her with the similarly returning Aga Muhlach, with whom she shared many beautiful moments, onscreen and off, during the five years she was based here, before she flew off to Hollywood.

All the more reason, therefore, for Aga to speed up winning his weight-loss “battle of the bulge,” to get back to “shooting trim” next year!

If memory serves, they were most successful and memorable as screen sweethearts in “Basta’t Kasama Kita” (1995), in which Aga played a jeepney driver and Dayanara portrayed “Princess Marinella of Bavaria,” who came to the Philippines incognito, as Ella.

The film was inspired by the Audrey Hepburn starrer, “Roman Holiday,” but the Star Cinema production effectively “localized” its storytelling, and the screen “chemistry” simmering and shimmering between its two leads was “kilig-illy” obvious.

For our part, we doted on Dayanara because, unlike other “imports,” she made it a point to learn the language and assimilate our ways—and also because she worked so hard at entertaining viewers.

With her looks and “official” beauty title, she could have coasted along on her celebrity cachet alone—but, especially in her dance programs on local TV, she pushed herself to the limit to give viewers a really good show!

That’s why, to this day, we use Dayanara’s dance numbers as touchstones for local TV dance exponents, who now tend to be too lazy and laid-back, and just move prettily or sexily and assume artful “poses,” instead of actually, frenetically dance up a storm, as TV dance divas and dervishes like Dayanara and Charlene Gonzales used to do!

Dayanara may be too mature to go the TV dance route this time around, but she still looks great and remains a vital, dynamite performer, as we’ve seen on her US TV drama series, “Watch Over Me.”

So, her “reintroduction” to the local performing scene should turn out to be the special event it deserves to be. Dayanara says she treasures her long stint on the local movie and TV scene in the late ’90s—and her local fans want to assure her that—the feeling is mutual!