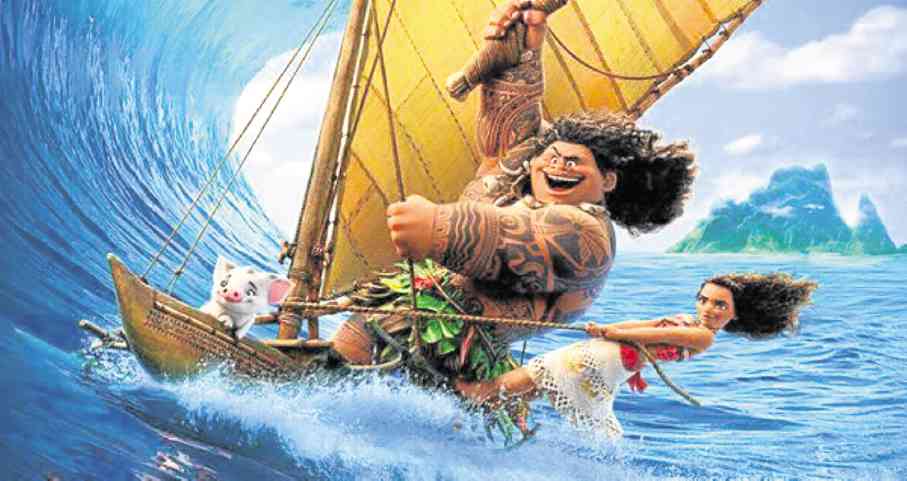 Last week, we made it a point to watch Disney’s new animated feature, “Moana,” in support of its continuing efforts to present young viewers with female lead characters who are strong and proactive, instead of the traditional prettily, prissily and phlegmatically “princess” types of yore.

“Moana’s” young protagonist is still a “princess” in Polynesia, who is destined to lead her people into a brave, new world—but, she definitely isn’t phlegmatic!

In fact, primed by her “crazy” grandmother’s own proactive proclivities, she dares to confront and vanquish all sorts of dangers to save her people.

The daunting forces and entities she faces up to include a formerly reignant demigod, Maui, voice-acted by Dwayne Johnson, who steals the “essence” of Te Fiti, the goddess of Moana’s island kingdom, resulting in her people’s deprivation and suffering.

Maui is first portrayed as a villain, but as the film unreels, that negative image is tweaked in a more positive direction after he loses his preeminent power to another, more hellish and wrathful god, who derives his fiery, evil force from a volcano’s eruptions and endless lava flow!

It is this seething incarnation of pure evil that has come into possession of the island goddess’ “eye” and heart, so Moana and Maui have to find a way to overcome their initial animosity, so they can join forces and vanquish their mutual adversary.

Aside from Moana’s spunky, upbeat character, what strikes us most positively about her early in the movie’s storytelling is the fact that she’s the animated film scene’s first Polynesian heroine.

That’s a very good thing because all permutations of racial color should be “represented” on the movie screen. It will go a long way in subliminally teaching impressionable, young viewers that we are all equal under the sun—and that racial discrimination is a big no-no, nix, nada and nyet!

Even more interestingly and instructively, if we tweak Moana’s looks just a little bit more, we can even say that she’s animated films’ first kayumanggi lead character so young Filipino viewers can more fully empathize with her and her screen exploits, because many of them look quite like her!

No more lily-pale, wan and weak-willed Sleeping Beauty dreamily waiting for her Prince Charming to kiss and revive her! This new Disney heroine isn’t even given a love interest, and is fully focused on saving her people, pretty much on her own!

Other plus points include lovely and dynamic visuals, especially the depiction of various aspects of water and the ocean, which “helps” Moana by instructing many sea creatures to join her on her difficult journey and mission.

On the debit side of the movie’s ledger, however, we must observe that, in general, its song-and-dance numbers aren’t all that entertaining.

Even more disappointing is the film’s loss of scripting energy and inventiveness at mid-point, after Moana ventures out beyond the risky barrier reef on her all-important mission.

Instead of coming up with creative plot developments to keep its strong storytelling dynamic and involving, the film degenerates into an ultimately enervating exchange of “witty” insults and countergambits between Moana and Maui.

The movie’s big, bright ending effectively picks up the slack, however, so it still ends up as a viewing treat.