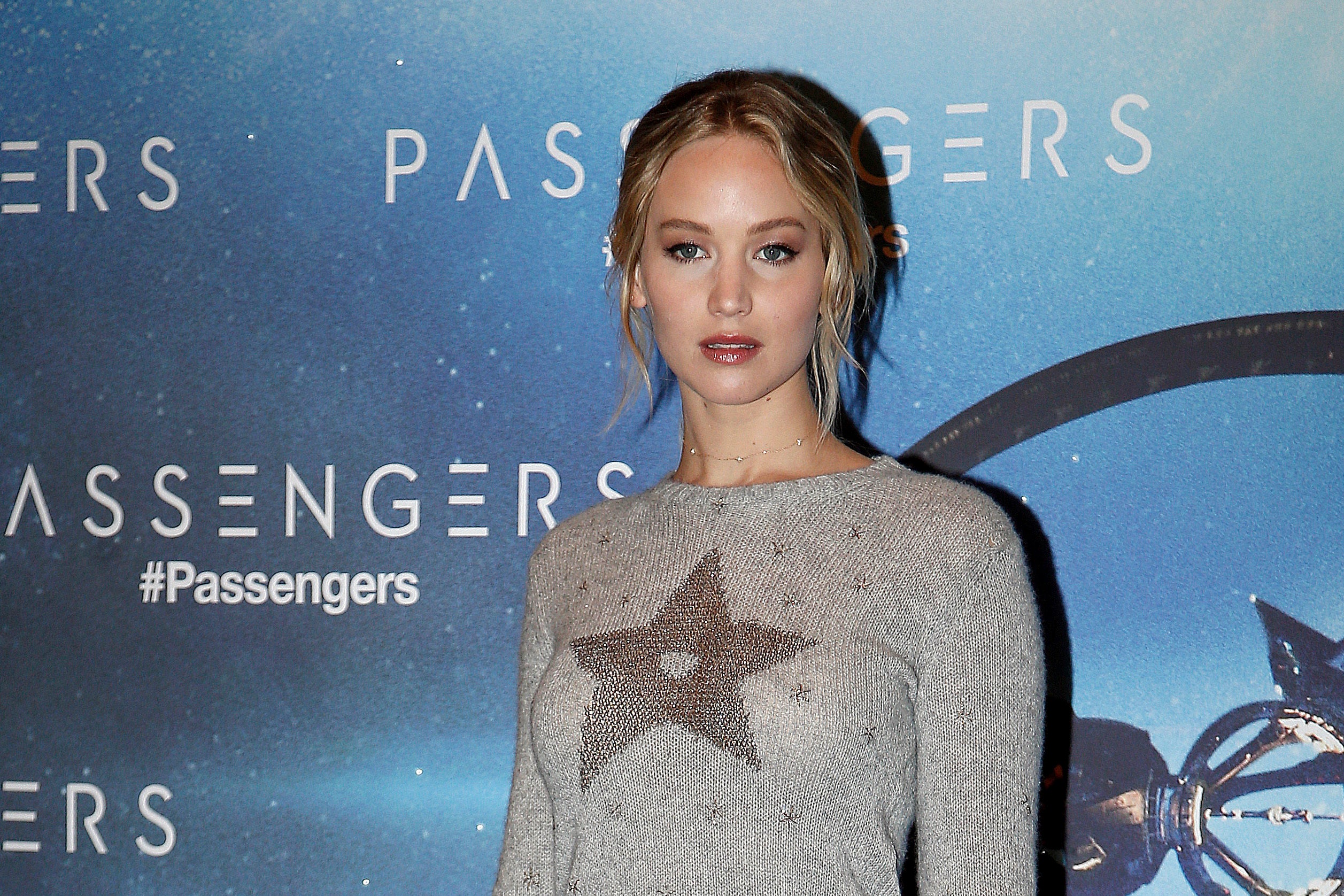 LOS ANGELES—In the sci-fi film “Passengers,” Jennifer Lawrence and Chris Pratt find themselves alone on a spaceship, after waking up 90 years earlier than intended en route to another planet.

In our interview, Jennifer quipped that if she were alone in a similar situation, she’d enjoy the solitude for a few hours, then she’d starting flipping out.

These days, the actress, 26, is often seen in the company of “Black Swan” director Darren Aronofsky, 47. Their romance apparently blossomed when they started working on an untitled drama that also stars Javier Bardem, Michelle Pfeiffer, Ed Harris and Domhnall Gleeson.

The busy actress has also signed on to star as “Zelda” in Ron Howard’s film on the Jazz Age socialite, as wartime photographer Lynsey Addario in Steven Spielberg’s “It’s What I Do,” and as bio-tech entrepreneur Elizabeth Holmes in Adam McKay’s “Bad Blood.”

We spoke via Skype to Jennifer who was in Berlin as part of her global tour to promote “Passengers.”

If, like your character Aurora in “Passengers,” you can finally unplug and be away from everything, what would you enjoy doing? I would enjoy the silence, the quiet, being alone, definitely not worrying about anybody staring at me. I’d have a glass of wine. I’d look at the cosmos. Then, in five hours, I would start to flip out.

Aurora has these routines—she runs and swims. What are your own routines to ground yourself amid your hectic life? Kind of similar. I like working out when I travel a lot. I like to sweat after a flight. It makes me feel like I’m getting some of the germs out, and it helps me sleep better. Watching “Modern Family” on my computer. It’s my consistent thing, which I do every night. That’s how I tuck myself in and my self-soothing method.

Always in a strange place

How much do you enjoy being alone? I enjoy being alone to a certain extent. It’s very important to be able to be alone, to self-soothe, especially with my job. We travel a lot. I’m always in a strange place. I’m rarely ever around my home with my friends and family. I’m normally away from everything I know. I’m [always] in strange hotel rooms.

So, you have to find certain things that keep things familiar. I like to bring candles that smell familiar and that make it smell like my home. When I can bring my dog (Pippi), then all my focus is just on my dog—walking her and playing with her, making sure she’s happy. And that I’m not thinking about myself. Or I watch TV on my computer.

Without giving too much movie magic away, how cool was filming that swimming sequence? None of it was fun. It was awful. But it was the coolest scene I had ever seen. There are scenes like the beginning of “The Dark Knight”—that scene’s crazy.

But shooting that swimming scene was awful. It was a week and a half of being in a swimming pool for 16 hours a day. And being in a tank. Being flipped upside down with water going up my nose and drinking water all day. It was miserable. But the end result was definitely worth it.

Do you still feel anxious when you have to shoot sex scenes? Have you gotten over filming your first sex scene? I felt a lot of anxiety. And then I’m so happy that I got there, and I realized how ridiculous it is. The sex scenes are the most un-sexual thing in the entire world. They’re just awkward and funny. So, in the future, I’d probably feel less anxiety.

It’s obviously too early to talk about the children you may have someday. In this movie, you’re the daughter of a famous writer. Your children will also have to deal with having a famous mom. Is that something you think about? I do think about it, because my children won’t have anything in common with my childhood. So, I’ll be starting completely from scratch.

I wouldn’t be who I am without my struggles. And my kids will grow up with money. I didn’t grow up like that. So there are going to be differences from my childhood to my children’s. But people have done it. I’m pretty sure actors are breeding. And everybody figures out a way.

Can you give us a hint on what to expect from your untitled Darren Aronofsky project? Not without my director killing me.