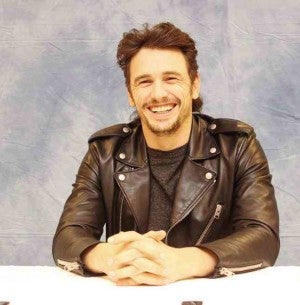 Los Angeles—Playing an obscenely rich man in “Why Him?” inspired our recent talk with James Franco on wealth, taste and, well, rich neighbors. It turns out that the multihyphenate talent grew up in a Palo Alto, California neighborhood with bold-faced last names, including the late Steve Jobs.

In real life, James is not your typical vacuous actor, of course—aside from being a busy actor, he’s a director-producer-professor-essayist-poet-author, not to mention an active presence in social media.

Is there a bit of you in this character, Laird Mayhew? I hope I’m not like him. The movie actually takes place in Palo Alto, where I grew up. So we have that in common. And I grew up literally five blocks away from where Steve Jobs lived.

His daughter, Lisa Brennan, the one who’s depicted in the movie (“Steve Jobs”), was in my high school class. She was a friend of mine. We were in the newspaper together.

And the grandson of Hewlett of Hewlett-Packard was in my class. Then, my journalism teacher who I now coteach a film class with at my old high school, is the mother-in-law of Sergey (Brin), from Google (cofounder). So that was all part of my world coming up. I certainly have that in common with the character.

He (Laird, his character) didn’t necessarily have that many tattoos. But I pushed John Hamburg, the director, to go as far as we could with the tattoos. I drew and designed some of those.

If somebody comes out with a killer line, and your instinct is to laugh because it’s funny, I know as a director that it can kill a moment.

What displays of opulence have you seen that made you think, you bought that or you had that made? That’s a question of taste. Like I’ve seen homes with incredible contemporary art, just filled with Damien Hirst, Richard Prince, Paul McCarthy and Picassos.

Then, I’ve shot in some homes—I don’t even know who they belong to. I’m very grateful they let us shoot in their homes, but they have marble living rooms with a fountain inside and a gold-lacquered piano—just everything that defines tacky, which is perfect in our movie, because the house was supposedly owned by a sleazy producer.

Were there parents of girls you were dating that you wanted so much to like you? I’ve had a few very serious relationships in my life. And in two out of three, I got along with the parents. With one of them, I loved the parents and the family.

Even though we’re not together romantically any more, I’m still close to the woman. And I’m close to the family. And my family’s close to them. They live in Palo Alto, too. So our families often spend holidays together.

With one of the women, I did have a problem with the parents. I was just a young punk then. Maybe they just didn’t like me. But it made it really hard when I’d have to go to dinner with them, because I just perceived so much negativity. It was so hard to be around this person that it hurt the relationship, in a way.

She loved her parents and wanted to spend time with them, and I had a hard time doing it. Fortunately, the one after that was the opposite.

What’s your relationship with money? I don’t know if I’m good with money or not. For a while, I collected a lot of contemporary art. I had some great pieces—Ed Ruscha, Richard Prince, Mike Kelley. I had an early Warhol.

When I went back to school, I wasn’t working as much, so my business manager said, “You’re going to have to sell the house or the art.” I was like, “OK, I’ll sell the house.” So I sold my house.

Then, my business manager was like, “You have to sell the paintings.” I had Murakami. So I sold the paintings. Since then, I haven’t spent that much money on collecting anything. In the past, I invested a lot in my students and projects that I was doing.

Fortunately now, I’m in a place where the classes I teach at UCLA and USC are funded by this company I am a part of, called Elysium Bandini, which is part charity and organization that supports up and coming young filmmakers.

Can you talk about your next book? I have a book that will come out next year with Faber & Faber called “Splash Mountain.”