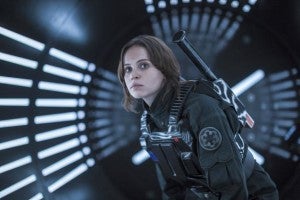 This image released by Lucasfilm Ltd. shows Felicity Jones as Jyn Erso in a scene from, “Rogue One: A Star Wars Story.” (Photo by Jonathan Olley/LUCASFILM LTD. via AP)

Disney and Lucasfilm unveiled 28 minutes of footage for reporters on Friday at Skywalker Ranch, teasing the origin story of the band of rebels who aim to steal the plans for the Death Star — the event that sets into motion the plot of the original 1977 “Star Wars.”

The footage skipped around in time and story line, but essentially sets up a world on the brink of rebellion. The Empire’s agents are everywhere, with stormtroopers roaming the streets searching for dissidents.

We meet the protagonist, Jyn Erso, as a young child whose parents, Galen (Mads Mikkelsen) and Lyra (Valene Kane), are of particular interest to the Empire, and specifically Ben Mendelsohn’s Director Orson Krennic. Without revealing anything else, it’s the specific origin story that still eludes audiences when it comes to the most recent “Star Wars” heroine, Rey. But twists and turns seem to await spectators in “Rogue One,” which finds a grown Jyn (Felicity Jones) in cahoots with the rebel alliance on a dangerous mission to try to stop the Empire from building their planet destroyer.

Director Gareth Edwards introduced the footage Friday, joking that they thought about showing 30 minutes but decided they needed to save something. The film was screened for the cast recently, but few have seen the final product, which will premiere Dec. 10 in Los Angeles before hitting theaters Dec. 16.

It also established a world that will look quite familiar to anyone who’s seen the 1977 “Star Wars.” Costumes, characters, and sets from that first film — and some of the prequels — populate this universe, including Alliance leader Mon Mothma (Genevieve O’Reilly) and Bail Organa (Jimmy Smits) and a few other cheeky surprises.

“Rogue One” also takes audiences to planets and environs that aren’t standard settings in “Star Wars” films, including a beach and a bustling marketplace.

“Rogue One: A Star Wars Story” is the first of three planned spinoff films set inside the “Star Wars” universe, including a young Han Solo film set for 2018. The so-called anthology films are separate from the main trilogy, which kicked off last year with “The Force Awakens,” and will continue next year with “Episode VIII.”

“We’re on sacred ground here,” Edwards said, pointing to a seat the middle of the theater where he said George Lucas would watch and edit his films.

Edwards said he pitched his vision for the film to Lucasfilm development executive Kiri Hart on the Skywalker Ranch campus.

Now that the film is finally finished, Edwards said the experience “feels like the end of something.”

But, he added, “if you do ’Star Wars’ right, it’s more like the beginning.” –Lindsey Bahr/AP Film Writer