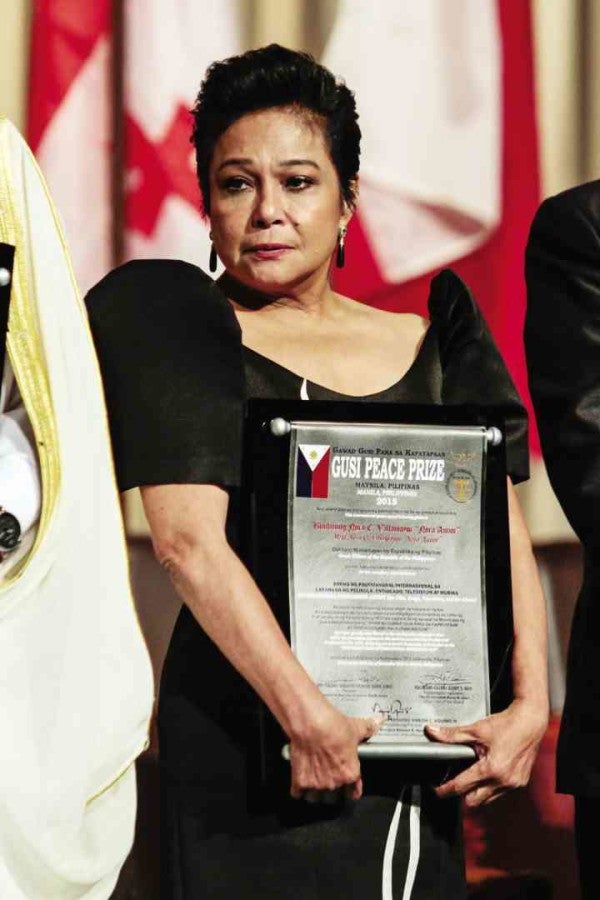 “She was my idol,” Nora, known as Guy in show biz, told the Inquirer. “Ibang klase siya. Para sa akin, siya ang pinakamagaling na artista sa industriya ng pelikulang Pilipino. Siya ang tanging artista na hinahangaan ko. (She was one of a kind. For me, she is the greatest actress in the Philippine movie industry. She is the only star I look up to.)”

Guy was stunned when she heard of Lolita’s passing last Tuesday. “Nagulat ako at sobrang nalungkot nang malaman ko na sumakabilang buhay na ang pinakapaborito kong artista. (I was shocked and deeply saddened when I learned that my favorite actress had passed away.)”

For a bit of trivia: Nora took over Lolita’s iconic role of tomboyish Jack in the 1978 comedy, “Jack ’n’ Jill of the Third Kind.” In both the 1954 original and the 1978 remake, Comedy King Dolphy played the role of Jack’s flamboyant gay brother, Jill. (In 1987, “Jack & Jill” was remade again—this time, with Sharon Cuneta as Jack and Herbert Bautista as Jill.)

Guy finally had the chance to share the screen with her all-time fave in Lino Brocka’s “Ina Ka ng Anak Mo” in 1979.

A memory that stands out in Guy’s mind involved her famous scene where she uttered the immortal line: “Hayop! Hayop!”

In the screen drama, Guy was devastated upon realizing that her mother (played by Lolita) had given birth to the child of her philandering husband (portrayed by Raoul Aragon).

Although it was Guy’s highlight, Lolita lent her costar full support throughout. Guy recalled: “Hindi ko makakalimutan na talagang inalalayan at tinulungan niya ako sa pamamagitan ng pag-arte sa likod ng camera, habang nakahiga siya sa kama. (I will never forget how she helped me by acting even though she was not in front of the camera and was supposed to be lying in bed.)”

Lolita was not in the shot and it was Guy’s closeup, but still the veteran actress guided and helped the younger thespian in the difficult dramatic sequence.

Guy recounted: “Siya ang tinitignan ko habang umaarte ako kaya ganadong ganado ako sa eksena. Awa ng Diyos, take one lang ako kaya niyakap ako ni Direk Lino pagkatapos ng shot. (I was looking at Lolita while I was doing the scene. That was why I was so inspired. Thank God, I only had to do it in one take. After the shot, Direk Lino embraced me.)”

Lolita was a giving costar. “Kahit si Raoul, inalalayan niya. Napakagaling niya. Hindi siya maramot at tinutulungan niya lahat ng kaeksena niya. (She also helped Raoul in his scenes. She was so good. She wasn’t selfish and was always ready to assist her costars.)”

Lolita and Guy shared the best actress plum at the Metro Manila Film Festival that year for “Ina Ka ng Anak Mo.” (Guy has an entry in this month’s MMFF once again, Arturo San Agustin and Real Florido’s “Kabisera.”)

Filmmaker Adolfo Alix Jr. was planning to reunite Guy and Lolita in a new movie. Before suffering a stroke three months ago, Lolita had already agreed in principle, and only requested that the story be “traditional, classic…not experimental,” related the young filmmaker. “I also wanted other Brocka babies, Hilda Koronel and Gina Alajar, in the film.”

Guy turned emotional: “Saan ka man naroroon, asahan mo na lagi kang mananatili sa aking puso. Hindi ko malilimot ang mga tinuro mo sa akin, at salamat na binigyan mo ako ng pagkakataon na makasama ka at makagawa ng isang pelikula na hanggang ngayon ay ipinagmamalaki ko at ng iba pang mga kababayan natin. Sa aking idol, isasama kita lagi sa aking mga dasal. (Wherever you are, rest assured that you will always remain in my heart. I will never forget the lessons you taught me, and thank you for giving me the chance to work with you and make a film that, until now, I and other Filipinos are proud of. To my idol, you will always be in my prayers.)”