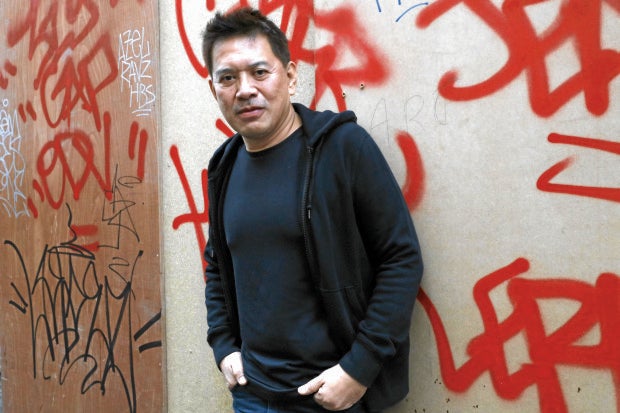 NEWWAVE OF MOVIEMAKERS Award-winning director Brillante Mendoza has turned his cinematic skills to promoting someone many in the West would see as an unlikely hero—President Duterte and his deadly war on illegal drugs. —AFP

But since then, the movie, “Ma’ Rosa”—a gritty, unvarnished depiction of drug use, police corruption and survival in the Manila slums—has acquired new relevance, as Mr. Duterte has accelerated a blistering crackdown on drugs, leaving thousands of Filipinos dead.

“Drugs, corruption—it’s happening all around us,” Mendoza said recently at his studio in Mandaluyong City.

In the film, Rosa (Jaclyn Jose) is a working-class convenience-store owner who resorts to low-level drug dealing to support her family. After she and her husband are arrested by the corrupt local police, their four children must scramble to buy back their freedom.

“Rosa may be a bad citizen, but she is a good person and a good parent,” Mendoza said. “People don’t see this perspective.”

Has Mr. Duterte seen the movie?

“I invited him to the premiere and sent him a copy of the DVD,” said Mendoza, who directed the President’s first State of the Nation Address to a joint session of Congress in July. “But I’m not sure if he’s seen it.”

Mendoza is part of a growing wave of moviemakers in the Philippines who are using their medium to shed light on often overlooked corners of society.

Many of their films are neorealist in style, telling stories of poverty, drugs, postcolonial malaise, bureaucratic corruption, environmental ills, homosexuality and the thriving ethnic diversity found across this archipelago nation.

Typically made independently, without studio backing and on shoestring budgets, the films often blur the lines between documentary and feature.

Many have also found their way onto the international festival circuit—some with great success.

Jose took home the prize for best actress for “Ma’ Rosa” at Cannes in May, seven years after  Mendoza was voted best director at the festival for his film “Kinatay.”

In September, another prominent Filipino director, Lav Diaz, won the Golden Lion at the Venice Film Festival with “Ang Babaeng Humayo,” a four-hour film noir about a woman who seeks revenge after being wrongly imprisoned for 30 years.

“The success of Philippine film abroad has not been an overnight sensation,” said Roger Garcia, executive director of the Hong Kong International Film Festival. “It’s taken some time to build up. They have been very persistent.”

It’s been a remarkable turnaround for an industry that just 15 years ago was nearly moribund.

The Philippines has experienced what are often called two golden ages of film: in the 1950s, and again in the 1970s and early 1980s (during the martial law years under President Ferdinand E. Marcos).

During that second wave, directors like Lino Brocka, Ishmael Bernal and Mike de Leon, working in the face of censorship imposed by the Marcos regime, made their names with socially conscious and political films and paved the way for this generation of independent filmmakers.

But the film industry as a whole struggled with piracy and competition from Hollywood.

Not until the early 2000s did independent film begin to flourish again.

With the introduction of digital technology, the costs of making a film dropped substantially.

And with less money on the line, filmmakers and investors became more willing to experiment with different forms of storytelling.

“Digital technology virtually emancipated us,” said Diaz, who is known for his experimental slow-cinema style. “We own the medium now.”

Around the same time, finding the money to make new work became easier after the advent of several Philippine independent-film festivals.

In its first year, in 2005, the Cinemalaya Philippine Independent Film Festival received a flood of pitches from around the country, from Manila down to Mindanao, for a program to help fund full-length features by young directors.

Ten entrants were awarded grants of about P500,000 apiece—enough to cover roughly a quarter of the cost of a low-budget movie in the Philippines at the time.

“Before, it seemed like there was nothing more to learn about Filipino culture through film,” said Laurice Guillen, a veteran director and a founder of Cinemalaya.

“But then the submissions starting coming in, and it was amazing. Most were stories that we had never heard of before,” she said.

One of those first films was Auraeus Solito’s “Ang Pagdadalaga ni Maximo Oliveros,” a coming-of-age story about an effeminate boy who lives in a Manila slum with his family of petty criminals and falls in love with a handsome young police officer.

The movie picked up several awards at the Berlin International Film Festival in 2006 and went on to become the official Philippine entry for the Academy Awards that year.

With Mendoza and Diaz leading the way, many say the environment for independent Filipino filmmaking has continued to improve.

More festivals have sprung up, and sources of financing have proliferated.

In recent years, directors like Erik Matti (already an established director of mainstream fare), Raya Martin and Jerrold Tarog have come to the fore.

What hasn’t changed, filmmakers say, is their biggest challenge: finding an audience at home.

As a result, more independent filmmakers have turned to the international festival circuit in search of recognition.

For many, it is also their best chance to find foreign distribution.

After its Golden Lion win in Venice, for example, “Ang Babaeng Humayo” was picked up by distributors in countries including China, France and Italy. “Ma’ Rosa” was released in France on Wednesday.

Some critics say the films favored by festivals abroad tend to cater to a widespread perception of the Philippines as a bleak, impoverished place of slums, corruption and drugs.

In recent months, filmmakers have faced a more immediate concern.

Until now, official censorship has not been a major worry. At the 2009 Cinemalaya, for example, director Pepe Diokno presented “Engkwentro” (released in the United States as “Clash”), based on extrajudicial killings carried out by death squads in Davao City, where Mr. Duterte was then the mayor.

But with the ascension of Mr. Duterte to the presidency, whether filmmakers will now dare to touch such subjects is an open question.

“There will be upheaval,” said Guillen, the Cinemalaya cofounder. “But I’m not sure how this will be reflected in our films, if at all.” —NEW YORK TIMES NEWS SERVICE