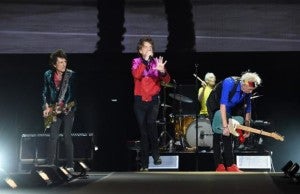 LONDON — Eleven years after their last studio album, the forever Rolling Stones are back once again with Blue and Lonesome, a tribute to the blues legends who forged the band’s soul.

“This album is a homage to our favorites, people that kicked us off in playing music, that was the reason we started a band,” charismatic frontman Mick Jagger recently told The New York Times newspaper.

“We were proselytizers of blues music. That’s what we’re still doing.”

It’s the band’s first album to feature only cover songs, drawn exclusively from the 1950s blues scene of Chicago, where musicians from the blues’ southern heartland had settled seeking work.

The city’s amplified sound marked a departure from the acoustic blues still popular in the American south, and paved the way for the rock ’n’ roll revolution.

Songs by Little Walter, Eddie Taylor, Howlin’ Wolf, Magic Sam, Jimmy Reed and Willie Dixon all feature on the record, to be released on Friday.

Completing the full circle, the band recorded the album at the British Grove Studios, close to the west London pubs where they honed their all-conquering sound in the early 1960s.

However, the band hadn’t intended their 23rd studio release to be a covers record.

“We cut quite a few new songs,“ said Jagger of the recording process, which took place last December.

“One day we got fed up doing this (new) song so we did one blues, then another, then another. I said ‘OK, let’s come back tomorrow and do three or four more’.”

Guitarist Keith Richards, who had recently released a blues-inspired solo album “Crosseyed Heart,” said he started the ball rolling by getting the band to play the Little Walter track “Blue and Lonesome.”

“As we played that song, it came out very well,” he told The New York Times.

“Then suddenly Mick says: ‘Let’s do Howlin’ Wolf.’ It just took off. After that, you couldn’t stop Mick. ‘Cool’, I said. ‘Let’s keep rolling, boys.’ In a way, it was a total accident.”

The spontaneity defines the sound of the record, lending a beefy, dirtier edge to the decades-old classics, recreating the febrile atmosphere of the West Chicago clubs where they were spawned.

Producer Don Was, who has worked with the band for two decades, takes much of the credit for the record’s raw energy, and for drawing every ounce of power from 73-year-old Jagger’s battle-weary voice.

The record does, however, allow the singer to show off his considerable harmonica skills, particularly on the Little Walter covers.

The ephemeral blues genius, who died aged 38 following a 1968 Chicago street fight, is behind the album’s high points, inspiring four tracks: “Just Your Fool,” “Blue And Lonesome,” “I Gotta Go” and “Hate To See You Go.”

He is set to become the subject of much-deserved attention on the back of the new album.

These songs, along with Little Johnny Taylor’s “Everything Knows About My Good Thing” – featuring electric-blues god Eric Clapton on guitar – all bring out the very best in the Stones, even if the rest are less memorable.

In stepping back to the very beginning, the band has been able to produce its freshest sound in recent memory, aided by the metronomic rhythms of 75-year-old drummer Charlie Watts.

“We played them more like a Chicago band than we’ve ever done.”

But only a few lucky fans may be able to experience the tracks live, according to Jagger.

“In a stadium it’s hard to do,” he said of the band’s blues-based catalog.

“If you were in a small club, if you could ask the Stones to play quietly, if that was possible, then you could probably do it.” –James Pheby, with Nicolas Pratviel in Paris