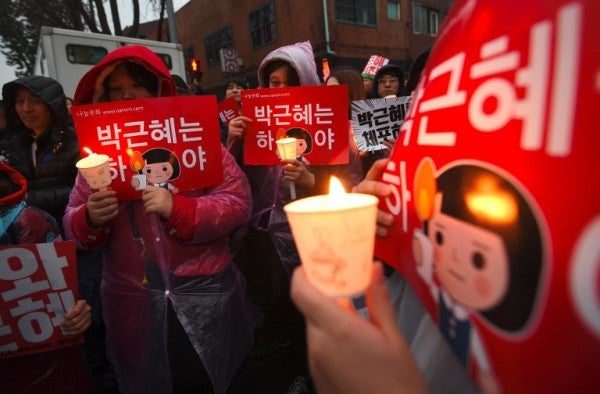 That confidante — Choi Soon-Sil — has been labelled Park’s eminence grise, a shadowy figure who is believed to have leveraged her close relationship with the president to extract more than $60 million from top firms, including Samsung.

Prosecutors say Park herself ordered her former economic adviser to help Cha pressure officials and private firms so that he would win contracts.

Cha, 46, has been charged with abuse of power, coercion and embezzlement and becomes the latest public figure to be embroiled in the snowballing scandal.

Choi, 60, is accused of meddling in a wide range of state affairs including the country’s preparations for the 2018 Winter Olympics.

Prosecutors last week formally charged her with abuse of power and coercion, saying Park was a “co-culprit” who had colluded with Choi to strongarm top firms into giving cash to non-profit foundations Choi controlled.

Park — now the first South Korean president to become a criminal suspect while in office — has rejected a series of requests from prosecutors to answer their questions.

As a sitting president, Park cannot be charged with a criminal offence except insurrection or treason, but she can be investigated and potentially charged once her term is over.

Park is faced with growing public calls to resign and a push by lawmakers to impeach her, with her job approval ratings diving to record lows of four percent.

Hundreds of thousands have taken to the streets in recent weeks to call for her ouster, with organizers claiming the latest rally on Saturday in Seoul drew 1.5 million people.