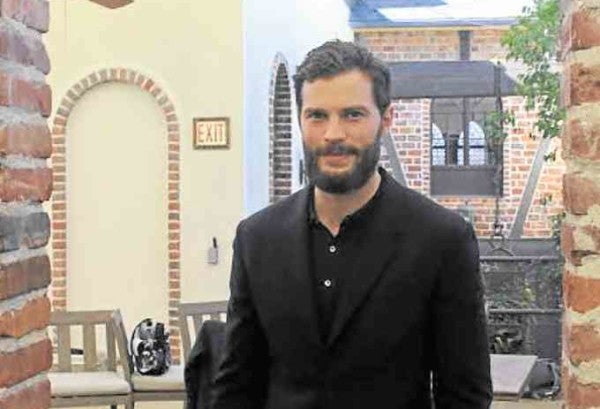 Los Angeles—“The change of director (from Sam Taylor-Johnson to James Foley)—that is a new energy but we had fun,” Jamie Dornan said about the new filmmaker of the next two installments of the “Fifty Shades” series, starring him and Dakota Johnson.

In this part two of our column on the actor behind Christian Grey and Paul Spector in the TV series “The Fall,” we continue the highlights of our fun, candid talk with the actor.

You must get some interesting reaction when people who watch “The Fall” see you. Can you also talk about how this character must be more challenging for you, more so than Christian Grey? Yeah, I have to be mindful of avoiding situations with me lurking in the shadows. That’s kind of fitting for people to see me like that (laughs). It’s weird with Paul Spector in “The Fall.” I’ve never been given an opportunity to play a character that’s so complex, deep, dark, twisted and psychotic.

I guess from a modeling past, I was being pushed more toward boyfriend-y roles, which is fine. But if you fall down a certain path like that, you end up not ever being able to express a different aspect of yourself as an actor.

I love television, because you have time to develop a character. It’s funny—with any character, you’re trying to find something you can recognize a part of yourself in.

But it’s quite difficult when you’re playing someone as heinous as Spector. “The Fall” totally transformed my career as to where it was heading.

You’re a family man. Maybe that’s the one thing you have in common with Paul Spector. Yeah, you’re right. With the madness of “The Fall” and “Fifty Shades” happening in the last four years, I started a family, as well (laughs). So the craziness of a career going in a certain direction coincided with having two kids under 3. It’s mad and beautiful.

When I did the first season of “The Fall,” I wasn’t even a father yet. So that part of it, you feel that you can relate to paternal love. But until you experience it, you don’t really know.

You come from a family with a distinguished line of doctors. Yeah, why am I an actor? I never could have been a doctor. I’m not bright enough, basically. Science was a subject I was completely the worst at. The only A’s I got were in drama, to be honest (laughs).

I was fortunate that my family never tried to push me or my sister [to pursue Medicine]. I had no interest in it. And it’s funny—when my dad left school, he was offered a place at Rada (Royal Academy of Dramatic Art). He’s an obstetrician, but he could’ve been an actor.

What are you most comfortable with, being a sex symbol or carrying guns? Being a lover or a fighter? God (laughs). Every little boy grows up in some way playing with guns. I’m so antigun myself, but they’re a necessity for telling that story (in “The Siege of Jadotville”). You can’t have sticks in your hands when you’re fighting off 3,000 mercenaries.

There was an element of doing something like that which I found very freeing, fun and exhilarating. I felt there was less pressure to pull off being manly, because a gun does the work for you.

But there’s nothing to hide behind when you’re trying to be an object of lust, like in “Fifty…” You’re exposed a bit more.

What did your two sisters teach you about women? (Laughs) It’s beneficial to have two older sisters. Boys who have sisters have a better respect for women. Because I was the youngest, they would dress me up in wigs and lipstick. But I feel that is good in a healthy way—that I have a good understanding of my feminine side. Every man has a feminine side. I think most men are ashamed to admit that, which is a problem.

It’s weird that men don’t show emotions enough. In Ireland, that’s a big thing, so it has given me sensibility. But my sisters also taught me practical things, like if you want to kiss a girl, how would you do that? I don’t mean the actual kiss, but I remember them always saying that you should ask, “Can I kiss you?”

What did you bring into your marriage? I grew up in a household full of girls, and I’m still surrounded by girls. It’s mad, but I love it. In a weird way, I almost don’t know how I would deal with a boy, if we had a boy. Once you’ve had two girls, that’s all you know.

Do you object to being referred to as the good-looking or cute guy? Look, there are worse things to be called (laughs). But there’s a part of me that wants to be recognized [for something other than the way I look]. In a project like “The Fall,” I f***ing throw myself at that project so hard. I get so deep into the mind of this horrible person.

Sometimes, you’re covered in blood, sweat and tears. But the main thing people want to talk about is, can a serial killer be that good-looking? And you’re like, f***.

I haven’t ever been called cute in my life. But it’s an issue that I’ve had since I was a kid, feeling like I was a skinny, very young-looking boy when I wanted my sisters’ mates to fancy me. I wanted them to not see me as their friends’ cute little brother.

I always played sports and rugby, but I was on the smaller side. My whole life, I’ve been fighting against that. That was probably why I was thinking, when can I have a beard? Because it makes me more like a man. This is like therapy now (laughs).

How avidly do you work on your physique? I’m not very good at that. I go through phases. But in the whole series of “The Fall,” I get my top off a lot. Paul Spector is obsessive about working out. So I guess it’s a pressure.

And “Fifty Shades” speaks for itself. You have to work out. I don’t enjoy it massively, more so because it takes up a lot of time. I have young kids. I don’t want to be away from them to be in a gym, just pushing heavy stuff around. That isn’t fun (laughs). I’d rather be fit doing sports.

What sports do you play? I grew up playing rugby, tennis, golf, sailing and skiing.

When news came out that “Fifty Shades” was going to be made, the haters were saying that it was going to be horrible. Then, $600 million later, guess who has the last laugh? I don’t want to ever feel vindicated. I try to avoid quoting Taylor Swift here with “haters gonna hate” (laughs). People are entitled to their opinion. It made a lot of money, but there are lots of people who didn’t like it and had objections with me, Dakota, how it was made, how it looked, what scenes were kept in and what scenes weren’t.

It’s a subjective world. There were f***ing loads of people who weren’t happy I played Christian Grey—and that’s fine. No one who would’ve been cast would have unanimously been appreciated. I took comfort in that.

Coming into the first one, I got cast five weeks before we started filming. It was f***ing insane. I don’t think it was a healthy way to go down any job. There was Charlie Hunnam (who was cast as Christian Grey, but dropped out due to a schedule conflict), and there was a scramble.

People were more relaxed with the second and third. And you can also take comfort in the fact that the first film made a lot of money, so the pressure is slightly off.

Dakota and I get along well together. Only I know what she’s going through, and only she knows what I’m going through. I’m thankful for that and that we have respect for each other—and we’re great friends.