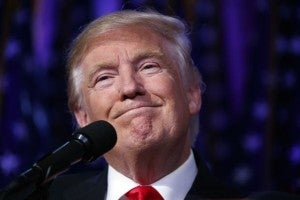 In this Wednesday, Nov. 9, 2016 file photo, President-elect Donald Trump smiles as he arrives to speak at an election night rally, in New York. Late-night hosts combined punchlines and audience therapy as they addressed Trump’s victory. Conan O’Brien asked his audience Wednesday if anyone needed a hug, then joked he called his old high school bully to congratulate him. —EVAN VUCCI/AP

“For years I’ve come out every night and asked how you’re doing, but I’ve never meant it. Tonight I actually mean it. Does anyone need a hug?” Conan O’Brien said in his monologue Wednesday on TBS. Despite divisions among voters, he said, “the optimist in me chooses today to be happy that we have fair and free elections at all. It’s an amazing thing.”

And then there were the jokes. “The first thing I did this morning was call my old high school bully and congratulate him,” O’Brien said.

ABC’s Jimmy Kimmel took viewers through the stages of grief, including denial (“No, the host of ’The Celebrity Apprentice’ is not our president”) and bargaining (“Maybe he’ll only build the wall waist-high, to keep short people out”) and, finally, acceptance.

“No matter how you feel about it, Donald Trump is the president of the United States. Of America. So thank God we legalized marijuana yesterday,” Kimmel said, referring to pot-related measures passed by voters in several states.

Like O’Brien, Stephen Colbert began his monologue by asking CBS’ “The Late Show” studio audience how they were doing, drawing cheers and applause.

“This is what it feels like when America’s made great again. I was wondering, and I was really hoping it would feel better because this sucks,” he said, drawing out the last word. Noting anti-Trump protests in New York and other cities nationwide, Colbert advised viewers, “Don’t ever be cowed by what happens in the next four years.”

For parents struggling to explain Trump’s victory to their children, he suggested lying: “Tell them anything. Tell them the president is Elsa from ’Frozen.’”

NBC’s “Tonight” host Jimmy Fallon focused on serving up jokes rather than angst.

CBS’ “Late Late Show” host James Corden, recalling the excitement of moving from England to America with his wife and son two years ago, said after the “nastiest” of campaigns it was critical to remember the nation’s values.

“This country isn’t about one election result. This country is about the people who live here. It’s you. It’s how you treat one another, it’s the tone you set that will define who we are” and reaffirm that America is great, he said.

Seth Meyers, who had sharply criticized Trump’s campaign on his “Late Night” show on NBC, struck a philosophical tone in hashing over Tuesday’s election.

“I felt a lot of emotions last night and into today: some sadness, some anger, some fear. But I’m also aware that those are the same emotions a lot of Trump supporters felt, emotions that led them to make their choice. And it would be wrong for me to think my emotions are somehow more authentic than their emotions.”

Meyers got a bit choked up when talking about his mother’s excitement prior to the election about the prospect seeing the first woman president. He hopes he and his mother live to see the day when a woman takes the White House, he said.

For now, Meyers is hoping for compassion for all Americans from the Trump administration.

“We’re always better as a society when we have empathy for one another, so I would just say to those Trump voters, congratulations. I sincerely hope he addresses your concerns,” Meyers said.

His show will be on watch, he said, to see if Trump fulfills the campaign promises he made.