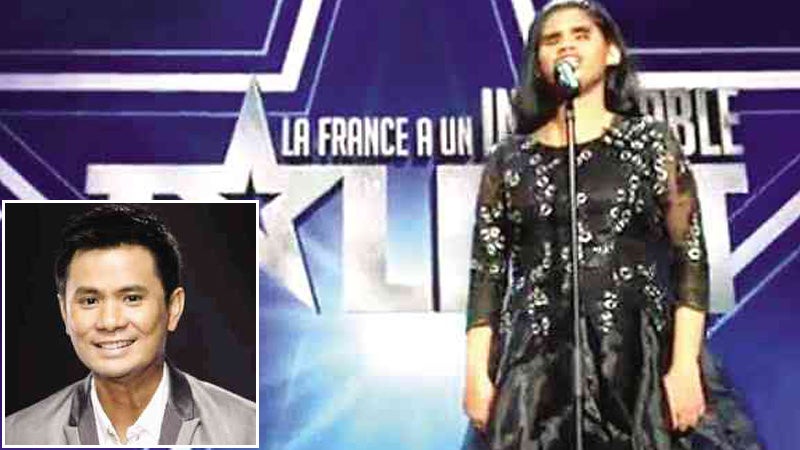 Blind Filipino singer Alienette Coldfire (aka Katchry Golbin) made it to “France Got Unbelievable Talent” with the help of Ogie Alcasid (left) and Solenn Heussaff.

Blind Filipino singer Katchry Golbin’s (aka Alienette Coldfire) incredible feat in “France a Incroyable Talent (France Got Unbelievable Talent)” is one for the books. Her heartfelt rendition of the French version of “I Dreamed a Dream” impressed the judges, so she has advanced to the next round of the competition.

It’s quite tough to please the French, who are usually snobbish, yet Alienette nailed it. I was moved to tears. Since I’m a Francophile just like her, I could totally relate to her fascination for anything French since she was young. Even if she never lived in France, she speaks French like a native. It blew me away, because I know how hard it is to master. I had to study in Paris to learn the language.

She said that when she heard the song, “La Vie en Rose,” it inspired her to learn French. That chanson could very well be her personal anthem, because she embodies what it means—which is to look at life with rose-colored glasses.

Alienette’s awe-inspiring story is a lesson in positivity. Her being blind did not make her lose sight of her dream. Even if she can’t see the Eiffel Tower, the Louvre and other famous French landmarks, what matters is France saw through her beautiful soul. Alienette’s joie de vivre bursts onscreen.

I was thrilled to chat (in French) with her on Facebook Messenger (@Aliènette Cdfr). It felt like we were long-lost Francophile friends. She endeared herself to me instantly. The new music sensation told me that visiting France was her ultimate dream. Making it to “France Got Talent” is beyond her dreams.

Ogie Alcasid paved the way for Alienette to make that dream a reality. His kindness knows no bounds. He is vocal about being a “fan” of the
25-year-old chanteuse ever since he heard her sing in GMA 7’s old talent search, “Pinoy Idol.” It takes a great singer to know one.

It will take you where you want to go.

Here’s Alienette, in Ogie’s words: “Alienette has the kind of presence I have not seen or heard. It’s as if her soul is the one singing to you. That’s an approximation of what I experience when I hear her.

“There may be others who are vocally more impressive, but there’s a sincerity in her every performance.

“She may be blind, but her blindness has never prevented her from reaching her goal and making her dream come true. She is humble and honest.

“In my talks with her, she wouldn’t hesitate to let me know what she feels. I got a text from her mother, because they needed help with her visa for France. I instantly thought of Solenn Heussaff, and she quickly asked her father for help.

“Perhaps, the fascination for Filipino talents abroad is part of our Creator’s bigger plan. There was a time when I myself got frustrated for Katchry (Alienette).

“Why wasn’t she being given the breaks that she deserved?

“Well, wifey (Regine Velasquez) and I prayed with her, her mother and her sister after she failed again in one of the contests.

“We asked God to take care of her, and for her to be patient. Her making it to ‘France Got Talent’ is an answered prayer.”