Tom Ford on film, fashion and his inspiration 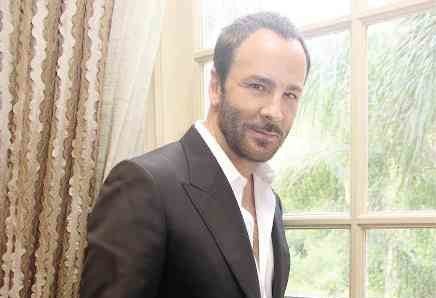 He’s very animated—expressive with his hands like a dancer. “I was a good dancer in the late ’70s or early ’80s,” he said with a laugh. After all, he was a fixture at the legendary Studio 54, where he met the likes of Andy Warhol.

These days, the Texas native is more of a dedicated dad to Alexander John “Jack” Buckley Ford, his 4-year-old son (born via surrogate) with his husband, journalist Richard Buckley.

Tom chuckled that in their Bel-Air home, the “uniform” is chucked in favor of casual wear.

“Now that I have a son, I also have a nanny,” he said with a grin. “I can’t walk to my kitchen naked anymore to make myself a bowl of cereal. So no, it’s probably either a dressing gown or at least boxer shorts and a T-shirt.”

He explained why he sticks to his usual look of dark, slim fit suit and crisp white shirt (with cuff links, of course), even when he’s directing: “In a world where people take your picture, you learn that, oh, I look better in this, or I don’t look good in that. It’s easy when you have a uniform.

“You should figure out what your uniform is. Find what you feel and look good in. Just wear different versions of that.”

Why did it take you seven years to make another film? I never intended for it to be seven years. I got caught up in my other business. I opened 100 stores. But it was also finding the right material.

I also had a son, who’s now 4. That was a deliberate decision when I had him. I even stepped away from my other business to concentrate (on my son). I want to be there throughout his life.

What kind of fulfillment does film bring you? It’s the most fulfilling thing I’ve ever done in my life, because it lasts forever. And it’s also the most fun, other than my son.

Fashion is great. It’s expressive, but it’s fleeting. When you look at something in a museum, you can admire it, but it doesn’t make you feel the way it did when it was new and fresh.

Your son is a big inspiration. He is. But he can’t watch these movies yet (laughs).

Everyone who has a child will understand that, before my son was born, the world began and ended with my birth and death (laughs). But now, I hear myself saying things to him that I heard my father say to me. You see yourself as just a link in the evolution of humans, as a part of all of it.

How similar or different is creating fashion and films? The process has been surprisingly similar. The result is quite different. By that, I mean, you have to have a vision: Why are you doing this? What are you trying to communicate?

Then, you have to hire very talented people, and you have to give them the space to perform, support all of that. But at the same time—actors might not like hearing this—you are steering them toward what you want to say.

Obviously, there are things that are very different. As a director, you have to be more of a psychologist, because you have to have control of the set, keep everyone motivated. In fashion, we do a little editing. So much of a film is created in editing. I spent seven months editing this one.

Amy Adams’ character, Susan, lives in a very glossy world. Do you relate to that? Absolutely. In certain ways, there’s a similarity between Susan and the character of George in “A Single Man.” They’re both somewhat autobiographical.

I know the glossy world Susan lives in. Sometimes, it disgusts me. I grew up in New Mexico in a very simple place. Luckily, I still get to escape to that part of the world.

It’s important to keep things in perspective. The most important thing to me are connections. I have been with Richard Buckley, whom I live with, for 30 years. My publicist has been with me for 25 years. I keep people in my life. That’s the mistake Susan makes, but she realizes that.

Talk about casting Aaron Taylor-Johnson, who gives one of the film’s compelling performances. His performance was unbelievable. Aaron is a friend. I have known his wife (director Sam Taylor-Johnson) for 20-plus years. I see them socially.

I was sitting at dinner one night with Aaron, and he was acting out a story. He switched into something, and I thought, he could totally do this! He surpassed all my expectations.

With you and Richard being parents, what are your schedules like? Every morning, I get him (Jack) up, get him dressed. Richard and I make him breakfast. I drop him off to school, which is close to my office. Richard picks him up at 3 p.m. We’re both home in time for a bedtime story.

Whether in film or fashion, you make people feel confident and beautiful. Who gave you confidence? My parents.

I had wonderful parents who were terrific at letting me be. I was a little kid who wanted to wear a jacket and a suit. I carried an attaché case to school, because I thought a book bag was messy.

My parents were like, “OK, you’re probably going to get beaten up, but go right ahead (laughs).”

How challenging is it when you have to dress up actresses for the red carpet? It’s often very challenging. It’s less challenging with people like Julianne Moore and Naomi Watts, who have their own sense of style. In today’s world, girls are terrified. When you have to step in front of the cameras, and there are TV people ripping you apart, saying, “I don’t like those shoes. She looks terrible,” that isn’t good. You might be the worst or the best. It’s highly stressful.

What are the pros and cons of fame and fortune? Fortune buys you freedom. That to me is the most important thing—more than material things. As for fame, you can usually get a nice table at a restaurant. But the bad thing about fame, especially since I have a child, is that I can’t go out with him. You can’t have a family moment. But that’s the price you pay.

I don’t know how a genuine movie star deals with it. I have a limited kind of fame. In certain parts of the world, I can’t walk down Bond Street, Fifth Avenue and Rodeo Drive.

Do you imagine a day when you will let go of your fashion empire? Fashion supplies me with the means to have that freedom, and to make the films that I want to make.

Do you plan to keep doing both fashion and film? I have 122 stores and a lot of people who work for me. It’s a big business. But I could see that, as I get older, it might start shifting in this direction (film). I have been doing fashion for 30 years.