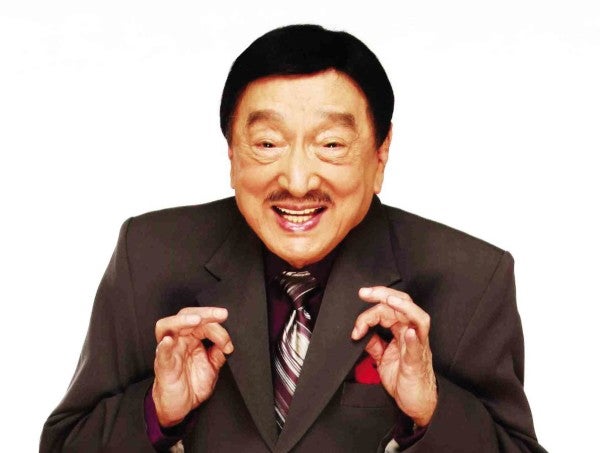 The victory of glum-faced, downbeat comedian Ryan Rems in “It’s Showtime’s” comedy tilt last year was noteworthy in many aspects—most especially in the way it showed how Filipino onscreen humor has changed over the decades—from Dolphy to Ryan Rems, that’s it!

How and why it’s changed says a lot about how Filipinos themselves have evolved, so the insights we can gain from thinking and talking about it can teach us a lot about us!

Let’s start at the very beginning, with Komedi King Dolphy, who reigned supreme from the ’60s onwards. When he first became popular, local humor in performance was still full of the literally “slapstick” conventions of the bodabil stage, with its cartoon characters and very physical sense of humor.

Aside from being funny, Dolphy could also sing and dance and look funnily fetching in drag—so, he did all of those things to rip-roaring effect.

In fact, his first starring role in the movies was as the flamingly gay Jill in “Jack and Jill,” opposite the “tomboy” portrayed by Lolita Rodriguez. Interestingly enough, even if Dolphy swished onscreen, he was known to be a “gentlemanly” lothario off-cam, fathering many children by multiple women, all without the benefit of marriage.

The irony and contradiction of this state of affairs didn’t reduce his popularity—in fact, it increased it. Go figure.

Later in his stellar career, Dolphy became even more celebrated for latching onto new trends—like his spoofs of James Bond films and cowboy flicks, which required him to engage in action and fight scenes, all for comedy’s sake.

He was also known for incorporating lines from new TV and film commercials in his punchlines. Thus did Dolphy consciously adjust his comedic style to make room for new inputs and variations, which explains why his career lasted for many decades.

Still demonstrating his penchant for periodically giving his fans something fresh and eventful, Dolphy made it a point to next conquer the world of television, which he helped make popular with his musical comedy shows and long-running sitcoms, like the iconic “John and Marsha.”

He also made sure that he often played an Everyman type of character, a hardworking family man who had to “bravely” put up with all sorts of challenges and naysayers.

After Dolphy passed away, any number of self-nominated “princes” of comedy presented themselves as the rightful heirs to his “throne”—but it’s instructive to see that, to this day, the viewing public has to affirm their subjective “self-nominations.”

In fact, except at the annual Metro Manila Film Festival, TV-film comedy productions have significantly fallen out of favor with audiences.

Why has the country’s A.D. (After Dolphy) comedy scene become so unfunny? First, many “stellar” comics today are much less hardworking and creative  than Dolphy was, and have opted to come up with quantity instead of quality.

Part of the problem is the fact that, in their quest for star value, some producers have tried to turn stars into comedians—even if they can’t tell the front of a joke from its butt!

For instance, there’s a TV skit show that has a cast of 20 stars and starlets who vigorously clown up a storm and tsunami combined—but, nobody’s laughing!

Recently, however, a hopeful sign has made its presence felt that some TV executives may be making moves to set things right. It’s about time!

For one thing, “It’s Showtime’s” “Funny One” tilt for new comedians has produced a new star in its winner, Ryan Rems. Will this be yet another unfunny case of “quantity over quality” all over again? Perhaps not.

There’s something about Ryan’s glum-faced, “counterculture” brand of jokes and pithy punchlines that is  coming across as fresh and insightful enough even for non-masa needs. Ryan  has made a career out of personifying losers—but has come out as a big winner!

Other than Dolphy, Ryan is also reminiscent of another much-missed stellar comedy talent—Rene Requiestas. Before he made it big as a masa comedy star, Rene honed his comedy skills in theater, which is rigorously demanding.

The big difference between Rene and Ryan is the fact that the newbie doesn’t do slapstick.

We hope that he continues to resist the admittedly profitable temptation, because his signature kind of humor banks on insightful observations and punchlines—which are the complete opposite of slapstick comedy.

Of course, it’ll take more than one or even 10 new comedians to turn the dismal comedy scene around. Other talents, plus more enlightened and less lazy writers, producers and directors have to weigh in on the problematic situation.

Comedy really is a more difficult and demanding craft and art than drama, because its process and effects are more inchoate, subjective and less subject to rules and control.

We should take our cue from King Emeritus Dolphy himself, who took the task of making his countrymen laugh very seriously, indeed. Like him, we should find our renewed sense of humor in insightfully observed experience, in daily life and the people we see around us, in situational rather than slapstick comedy, in new developments, contexts and trends.

Dolphy—and Rene Requiestas—didn’t rack up their impressive achievements by taking their intended audience for granted, so why should lesser talents be so smug and easily self-satisfied?

There are big shoes to fill, so hard work, real humor and renewed respect are key. If the comedy king and prince’s self-nominated heirs cluelessly come up short—the joke’s on them.