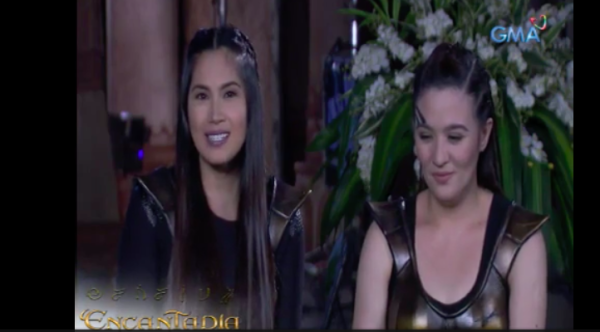 Diana Zubiri, who played the character of Danaya in GMA Network’s original “Encantadia” series, returned on Tuesday as a villain of the four sang’gres in the series’ remake.

During a scene in Tuesday’s episode, the face behind the enigmatic character of Lilasari was unveiled, played by Zubiri. The thrill and bewilderment turned her into an instant trending topic on Twitter with the hashtag #MukhaNiLilasari and phrase Si Diana Zubiri.

In a video interview posted on the Encantadia website, director Mark Reyes narrated about the sexy actress’ special participation in the series.

“Right after we saw the reaction of the fans of the ‘Encatadiks’ that Sunshine (Dizon) is part of the show, it was very easy to realize, to figure out that we have to bring in Diana in the show,” he said.

Zubiri could not contain her excitement when the show’s director asked her to be part of the series again.

(I am very excited too, of course, I want to be part of the show [and] I don’t want to be lost from it because [in] Encantadia, all four of us bonded before.)

Sunshine Dizon, who played Pirena in the 2005 series and who is now playing Adhara in the remake, also expressed her glee in working once again with Zubiri.

(We’re all very excited. [The] original Encantadiks were all guessing. And then, I said ‘okay who is it?’ And in their mind, it was really Diana Zubiri. But I couldn’t say it was Joy.)

Moreover, Reyes mentioned that Zubiri and Dizon’s appearance in the show was reminiscent of the original series. “The minute she spoke her first dialog, wow, it’s like I’m back to 2005, within Danaya and Pirena talking,” he said.

In the storyline, Lireo-born Lilasari has the magical powers to turn people who look at her face into stone. To prevent the spread of her curse, her adoptive mother and first queen of Lireo, Cassiopeia, played by Solenn Heusaff, molded her a mask which she can use. Lilasari emerged into a cold-hearted and revengeful fighter when Cassiopeia crushed her dream to succeed her throne. Lilasari was sent to Carcero and after years of incarceration, she managed to escape with the help of Adhara.  Gianna Francesca Catolico

‘Encantadia pays homage to ‘GoT’