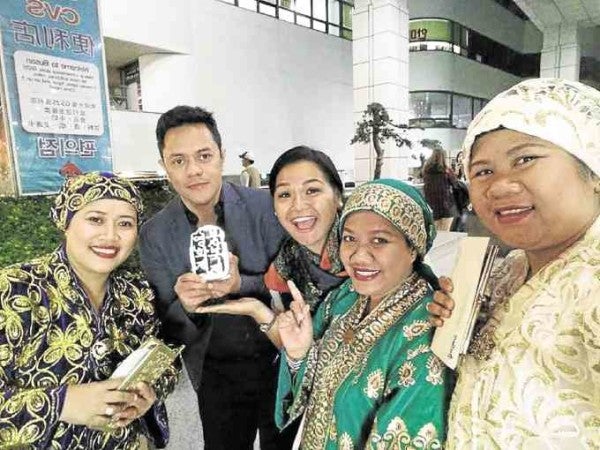 Surprising. That was how Filipino filmmaker Sheron Dayoc described the “unexpected” win of his documentary, “The Crescent Rising,” at the 21st Busan International Film Festival held recently in South Korea.

The docu, which tackles the armed struggle in Mindanao, bested 10 other entries in its section (including compatriot Baby Ruth Villarama’s “Sunday Beauty Queen”), to win the Mecenat Award.

Dayoc, who hails from Zamboanga, told the Inquirer via Facebook Messenger a few hours after his victory: “I never thought the film could actually win best documentary.”

Dayoc had already started packing his bags, to attend the Saturday night premiere of his latest feature film, “Women of the Weeping River,” an entry at the QCinema fest back home, when he learned about the prize.

As such, Dayoc had to leave extra space in his luggage for the trophy. “I was conditioned to go home, but had to extend my stay for the awards ceremony last Saturday,” he related.

The honor comes with a grant of US$10,000—to assist the filmmaker’s next production.

The Filipino filmmaker expressed the hope that the recognition would lead “to more opportunities and platforms to share our film so that people would know the true plight of our brothers and sisters in Mindanao.”

Variety critic Maggie Lee lauded the docu as “a knowledgeable study of the grievances and ideals of the [members of the] Muslim community, often portrayed as violent insurgents in skewed popular media.”

Lee recounted that Dayoc’s debut film, “Halaw: Ways of the Sea,” which competed in the New Currents section of Busan six years ago, “shook” her “to the core with its heartrending depiction of Mindanao migrants taking to the dangerous high seas in search of work.”

“Halaw” topped the Cinemalaya fest and won the Netpac Award-Special Mention at the Berlinale that season.

Through his filmmaking, Dayoc has always endeavored to “understand” the ongoing conflict in the land of his birth.

“I want to know the dreams of our Muslim neighbors,” said the director, whose father was a military man. “This desire has influenced my filmmaking.” Many of his films (from “A Weaver’s Tale” to “Women of the Weeping River”) depict Muslim culture and history, he noted.

The QCinema jury commended the film for “being an urgent document [that] clarifies current issues…and, through risky filmmaking, conveys a brave summary of a historical moment.”

This latest recognition inspires Dayoc all the more to persist in telling stories about Mindanao.

“We wish to continue to tell tales of human dignity and the strength of the human spirit,” he said. “We hope that our stories will likewise encourage our people to keep on dreaming and living.”