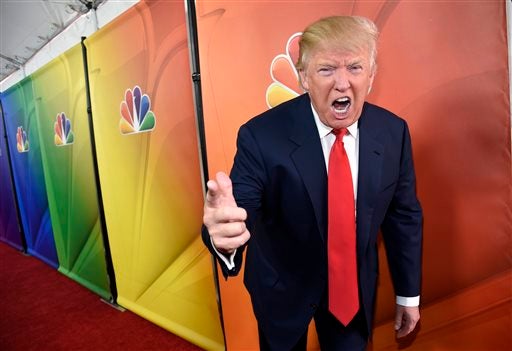 In this Jan. 16, 2015, file photo, Donald Trump, host of the television series “The Celebrity Apprentice,” mugs for photographers at the NBC 2015 Winter TCA Press Tour in Pasadena, California. AP FILE

His “Hustler” adult media and retail empire said the cash would be paid for “verifiable video footage or audio recordings” that it uses before the November 8 election “clearly showing Donald Trump engaging in illegal activity or acting in a sexually demeaning or derogatory manner.”

“I have always celebrated women,” Flynt said in a statement. “Women in all shapes and sizes. To treat a woman like Mr Trump himself has is both disappointing and unbelievable, especially coming from someone who wants to be our president.”

The free-speech campaigner “has made it his mission to call these hypocrites out and provide the public with as much information about their indiscretions as possible,” the statement added.

The real estate tycoon’s candidacy has spiraled downward since he said during a televised debate with opponent Hillary Clinton last Sunday that he had not grabbed women by their genitals without their consent or carried out other actions he bragged about in a 2005 “hot mic” video.

Observers suggest it may have been Trump’s denial that motivated the women to come forward.

Hustler said it made similar offers in 2007 and 1998 to root out “hypocritical officials who had engaged in the same behavior they publicly condemned.” CBB