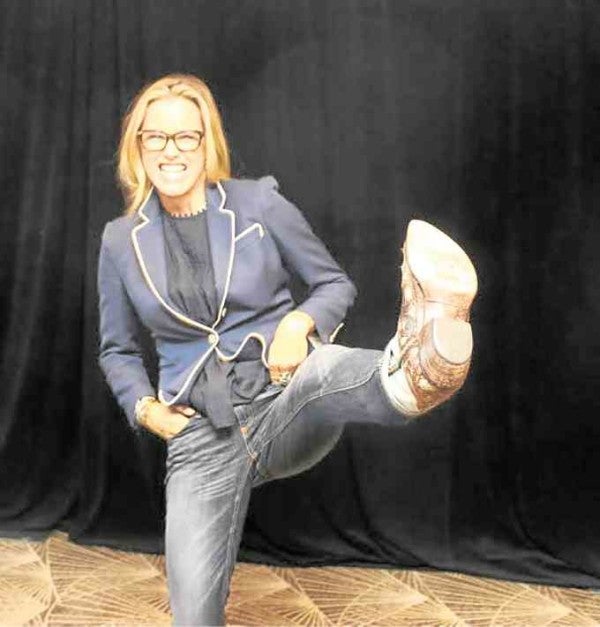 Los Angeles—“Oh my God, is it called maintenance now?” Tea Leoni replied when asked how she maintained her good looks at 50.

“I recognize that I no longer go to the gym for my ass, and I don’t have a gym for my heart,” quipped the actress, noted for her candor and wit. “That’s less fun, although a greater motivator, of course.

“My grandmother told me that 50 was the best. She said that by 50, your kids had all graduated from college. They were ensconced in great careers. You were at the peak of your own. Your parents were out of your hair.

The star of CBS’ “Madam Secretary” wore glasses and looked fetching in a blazer, jeans and brown boots in this recent chat at the Marriott Essex House in Manhattan. The New Yorker—who’s the mom of two teenagers with ex-husband, David Duchovny—did a high kick when she posed for pictures.

When the talk somehow veered toward the Angelina Jolie-Brad Pitt split, Tea said, “Is that really happening? Come on, we can gossip a little bit.”

On her own divorce from David in 2014, Tea commented, “We had it easier. The amount of attention on celebrities has certainly grown exponentially since David and I were in the thick of it. At a certain point, they had to put it in my contract to go to my own premieres. David and I are homebodies.

“Our greatest concern, of course, was our kids (Madelaine West, 17, and Kyd Miller, 14). We realized that if we were to shelter them from it, we would lose. So, our approach was about full communication. That worked. They’re good kids. My daughter’s applying to college this year, so I’m a wreck. But she’s ready to fly.”

In “Madam Secretary,” Tea plays the titular role—a shrewd secretary of state, Elizabeth McCord, who deals with today’s international issues, both at the White House and at home. Tim Daly, Tea’s boyfriend in real life, portrays her husband, Henry McCord.

Tea cited the difference in a reality-based drama versus her ex’s popular TV series. “I remember when David was doing ‘The X-Files.’ They’d see an alien, then two weeks later, they have to act like they’ve never seen an alien. This is different.

“The greatest challenge, going into the third season, is that this woman came into this not as a career politician, but as someone with very fresh eyes at every negotiation, devastation and disaster.”

With a smile, Tea cracked, “I’ve negotiated quite a bit, and I’ve solved some rather incredible crises in the world. I apparently wrapped up the Middle East problem in the second season.”

On how Tea relates to the storyline about a threat to the McCord family in the third season, Tea explained, “For the show, it was quite appropriate, but it was a walk down a lane I’d rather have forgotten. I remember the first time it was printed that it was suggested that West, our daughter, was an alien. I thought, oh, that’s so clever. But it ended up influencing some people who didn’t understand the fun of that.”

The show couldn’t be timelier. Hillary Clinton, who was a former secretary of state, is now running for president against Donald Trump. Tea’s Elizabeth is also grappling with the decision to go for the presidency.

“We certainly felt like we couldn’t avoid something about an election,” Tea admitted. “This election season is so provocative. I had a great conversation with Barbara (Hall, one of the show’s executive producers) about this.

“We laughed about it, because we felt strongly that what was a bit of the inspiration for this show was taking a look at the polarization around politics in the US—this party loyalty versus country loyalty.”

“I’m flattered to death,” Tea reacted to reports that Hillary avidly follows the series. “My image of Hillary Clinton watching the show is that she’s just laughing the whole time. I hope Hillary likes my clothes.

“But what I have heard is that she likes the family stuff. Tim (Daly), as the head of The Creative Coalition, goes to both the Republican and Democratic Conventions to promote the arts. He was in a room with Bill and Hillary. Bill told him, ‘I watch the show to find out how to behave.’ I thought that was very cute.”

Here’s what Tea hopes for her character: “I want Elizabeth to make more mistakes. The first season, I was like Superman. Actually, somebody gave me a cape as a joke.”

Regarding how women are more supportive of each other these days, Tea replied, “When you say we can be our own worst enemy, that’s shifting—and I feel that women are getting much better at holding each other’s back.

“As far as men and how I’m thought of differently, I want Tim to look at me in a certain way. So far, that’s working.”

Throughout our conversation, Tea repeatedly brought up her paternal grandmother, film and stage actress Helenka Adamowska Pantaleoni, who cofounded the US Fund for Unicef and was its president for 25 years. That inspired Tea to become its goodwill ambassador. She and her dad, Anthony Pantaleoni, earned the Audrey Hepburn Humanitarian Award for their service.

“This is the woman who had the most influence on me,” Tea said of Helenka, who died in 1987.

“My grandmother passed away right before I got my first acting job. I’m sorry about that, because I would have liked for her to have seen some of this. She was a master negotiator.”

On her own mom, Emily Patterson Pantaleoni, Tea said, “My mother’s a pistol. She has an absolute intolerance for injustice.”

About how she would like to see her character in the future, Tea answered, “How about if I do become president, I nominate and put forward another secretary of state, who’s female? Then, we don’t have to change the name of the show. It’s ‘Madam Secretary,’ and it can go on forever. That’s the producer in me but, as an actor, I haven’t decided yet.

“But I want to keep her pristine in a way. There’s something unsullied in her thinking. As she gets better at negotiation, I [also] have to get better. I’ve negotiated pretty much with everybody already. I’ve had practice. I want to keep something alive—a new point of view of her. That’ll be my challenge coming forward.”