Sarah Geronimo is happy to inspire others 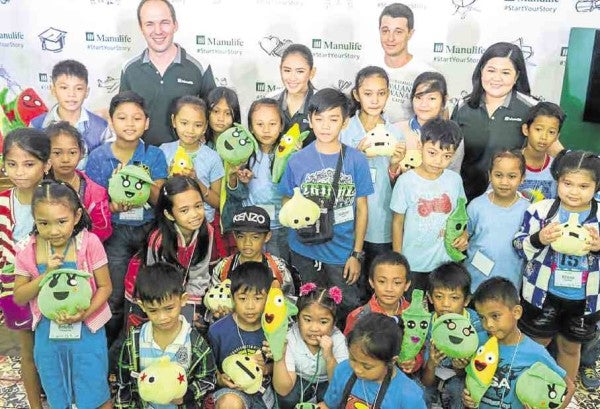 Sarah (center) wants to reach out to people and share with them her experiences. Photo by Eloisa Lopez

A different Sarah Geronimo has emerged from a self-imposed two-month break from show biz.

The singer-actress appeared to have experienced a paradigm shift in terms of her viewpoint and goals. “I’m more energized now and motivated to work harder. I’m at a stage in my life when I’m starting to question my purpose for doing things.

“I realized that I didn’t want to work just to please people, just to be a hit. My main goal now is to share whatever talent I have in order to glorify Him, whether or not critics appreciate it.”

Speaking in Filpino, Sarah added, “There comes a point in our lives—after we have successfully filled concert venues and movie houses with appreciative people—when we realize that this shouldn’t be just about us anymore. We have to look at these as gifts from God. We have to use our talent to benefit other people.”

Sarah recently hosted a visit to the Museo Pambata in Manila for children of the Manulife-Gawad Kalinga (GK) Village in Muntinlupa City. She was also with the kids when they attended a toy-making lesson given by Plush and Play, a GK social enterprise. The project aims to build 124 houses in a community in Muntinlupa City.

The 28-year-old singer-actress is featured in Manulife’s “Start Your Story” campaign. She said the day-long event with the kids was heartwarming: “I couldn’t contain my excitement as I looked at them. I felt like I was one of them while we were making stuffed toys. I’m thankful for the opportunity to spend time with them. I hope they were able to enjoy the day as much as I did.”

Sarah also performed one of her songs, “Tala,” at the event.

At the Q&A session, Sarah told the kids: “When I was your age, there were days when I also felt too lazy to go to school—all I wanted to do was play. Remember that studying hard is part of your preparation for a good future. Give your studies the importance they deserve.”

To the parents, she said: “Let’s support the kids every way we can. It’s important to give them the encouragement they need to develop their skills. That’s what my parents did for me. My mom said she saw my eagerness to perform as early as when I was 4 years old. They supported me, brought me to auditions and singing contests. I have experienced a lot of rejections, but my parents were there to guide me.”

Sarah said she was close to giving up when she joined the talent search, “Star for a Night,” where she became grand champion at age 14.

Before she took a break, Sarah was seen in the movie, “The Breakup Playlist,” and acted as mentor in “The Voice of the Philippines.” She has returned to cohosting the Sunday variety show, “ASAP.”

Sarah said she was grateful for the break. “When I took a hiatus, I was able to cross off several items on my bucket list: cooking and pole dancing classes, mountain climbing, traveling and even spelunking (exploration of caves), which I did without any double for a TV commercial. I’m happy to be back, and in a position to inspire more people,” she said.

“For me, the happiness you feel when you’re successful in your work is only temporary. You’ll eventually feel empty if you have no one to share it (success) with. True happiness can be seen in the smiles of the people you helped,” she said.

Sarah talked about her cousin, who left the city to teach children in rural areas. “She is a graduate of UP (University of the Philippines) and is younger than me. She opted to go up the mountains to teach there. I’m happy for her because she has already found her purpose in life. I told myself that I should be able to do that, too. I have to make time for that—to reach out to people and share with them my experiences.”