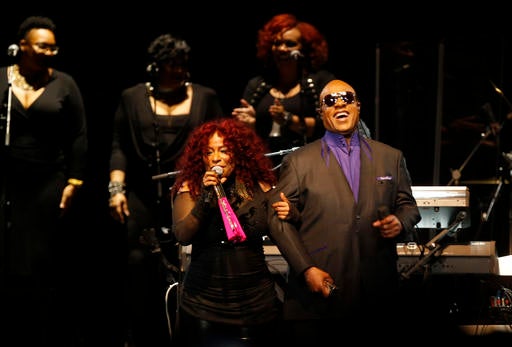 SAINT PAUL, United States—Prince was remembered as an ingenious artist and closet humanitarian but mostly as the provider of decades of joy as artists flocked to his native Minnesota for his sole public memorial Thursday.

“Thank you, Prince, for all the great works you have done. You will be in our hearts forever,” Obama, a fan of The Purple One who invited him to play the White House, said in a brief video message.

Instead, a parade of singers close to Prince took turns on his hits before a purple sea of 20,000 dancing fans at the XCel Energy Arena in Minnesota’s capital Saint Paul.

As Chaka Khan, who revived her career as the queen of funk with an assist from Prince, sang her signature song “I Feel For You,” she brought to the stage soul legend Stevie Wonder, who accompanied on harmonica.

Wonder, whom Prince cited as a role model, sported a purple shirt under his suit as he joined Khan on another feel-good anthem, “1999.”

Setting the joyous tone, Prince’s ex-wife, the choreographer Mayte Garcia, came out in a leopard-print dress and matching bikini top, performing an elegant belly-dance in which she balanced a sword on her head.

The Middle Eastern beat morphed into Prince’s “7.” Garcia did not address the crowd, letting her feelings be known with a beaming smile instead.

Delighting an audience made up mostly of local fans, the concert opened with Morris Day, Prince’s childhood friend in Minneapolis who played his rival in the classic 1984 film “Purple Rain.”

Day led his band The Time in funky tracks including his best-known, “Jungle Love,” which Prince co-wrote under a pseudonym.

READ: Prince gone: Only April but it’s a terrible year for music

Prince spent his life around his hometown Minneapolis, which is adjacent to Saint Paul, with his funk style becoming known as the “Minneapolis Sound.”

He died on April 21 at his suburban Paisley Park compound, which last week opened up to tourists for the first time as his estate seeks to ensure financial stability.

Prince’s reciprocated hometown love stands in contrast to that of another Minnesota-born great, Bob Dylan, who won the Nobel Prize for Literature Thursday and rarely returns to his birthplace.

With Prince’s body cremated, his tribute also marks a difference from Michael Jackson, often considered his rival in the 1980s, whose star-studded memorial service in 2009 saw his gold-plated coffin brought into a Los Angeles arena.

Video testimonials said that Prince was active in charity anonymously despite his image as a recluse.

Van Jones, a former adviser to Obama, said fans would be stunned to know the number of projects secretly funded by the musician, who had turned to Jones for logistical help.

Geoffrey Canada said Prince had quietly given $1 million to his Harlem Children’s Zone, which educates poor children in New York.

Singers Luke James and Bilal pulled off Prince’s most inimitable trait — his powerful falsetto — with James bringing in The Purple One’s sex appeal to “Do Me, Baby.”

Ana Moura, the Portuguese singer Prince championed, transitioned from her own songs into “Little Red Corvette,” adding a touch of her fado genre’s mournfulness.

In one of the more somber moments, Judith Hill — the last in a long line of Prince protégées — sang “The Cross” from his 1987 album “Sign o’ the Times,” one of his more overtly religious tracks.

“I know that Prince is alive and well and he is happy right now,” she said.

Prince was active in the Jehovah’s Witnesses late in his life but also had an idiosyncratic sense of faith, with his songs often merging faith and sexuality.

In one video shown at the concert, Prince said he believed that faith should not be “based on fear” of committing misdeeds.