‘The Romance of Magno Rubio’ 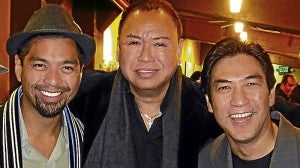 BERNARDO Bernardo (center), writer-director of the Tagalog rendition of “The Romance of Magno Rubio,” with actors Giovanni Ortega and Jet Montelibano photo by ruben nepales

That sign on the stage provoked a somber mood earlier in the evening, as the play, “The Romance of Magno Rubio,” brought us back to 1930s California when such warnings greeted Filipino migrant workers. These men, who were lured from the Philippines by US businesses to toil in California, Washington, Oregon, Hawaii and Alaska in the early 20th century, believed in the democratic promises of America.

Instead, these “manongs” (“older brothers,” a term of respect for early Filipino immigrants) were discriminated against—they could not bring their wives to the United States, forbidden to marry Caucasian women or own land, barred from becoming US citizens, among others. Many of these restrictions were actually contained in the Asian Exclusion Act passed by the US Congress in 1924. The men experienced beatings. Some were lynched. Accounts documented that even when the workers were out in the field, crop dusters flew over them and sprayed insecticides.

“The Romance of Magno Rubio,” Lonnie Carter’s stage adaptation of Carlos Bulosan’s seminal short story, is set in that historical context. It opened off-Broadway to acclaim in 2002. Last weekend, the play got a new Tagalog translation that world premiered at [Inside] the Ford in Hollywood, California.

After watching the absorbing production written and directed by Bernardo Bernardo, the audience mingled with the cast and staff for a reception that was celebratory in spirit, in contrast to the play’s sobering reminder about what our “manongs” went through. That’s not to say that the play is a “downer.” The production, which also has performances in English, has many moments of humor (and occasionally, music) since Filipinos, pliant like the bamboo, often resort to smile and laughter in the face of adversity. 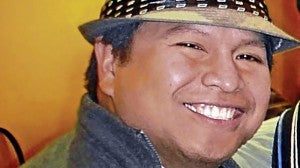 One by one, the cast came out to join the reception: Jon Jon Briones, who plays the title role, Eymard Cabling, Antoine Diel, Frederick Edwards, Erick Esteban, Gelo Francisco, Jet Montelibano, Giovanni Ortega and Muni Zano. We missed Elizabeth Rainey, who essays Clarabelle, a gold-digger from Arkansas, whom the illiterate, lonely Magno Rubio met through a lonely-hearts magazine. Magno courts Clarabelle, whom he has never met, by mail and gives in to her requests for money.

The Filipino theme was continued in the delicious food served by Cecilia De Castro, who has worked and continues to collaborate with Wolfgang Puck, including the Academy Awards Governors Ball. She and her staff and students at Academy of Culinary Education (ACE) had guests coming back for seconds and thirds of cucumber hors d’oeuvres (inspired by the “Filipino pipino” pun in the play) pancit, lumpiang Shanghai, empanada and more.

Bernardo, himself the embodiment of Pinoy humor and resilience, fielded congratulations, as did producer Ted Benito, for whom staging “Magno Rubio” has a deeply personal resonance. Ted’s father, the late Maximiano Ablan Benito, was only 18, the youngest in the family, when he hopped on a US-bound frigate.

After graduating in Hollywood High School, Maximiano joined his “kababayans” and labored in fields, from Delano to Bakersfield, and then, during the winter months, worked in Alaska’s salmon canneries. Maximiano met Carlos Bulosan once when they were both on a train, headed for new jobs in a farm in California’s Central Valley.

Ted wrote in his producer’s notes for the play, “Bringing ‘The Romance of Magno Rubio’ to life on stage brings my dad’s life, and the life he gave to me, full circle. I’m sure he and his fellow ‘manongs’ are proudly smiling on us.” 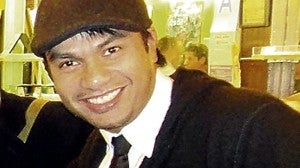 LA Weekly’s theater critic Mayank Keshaviah raved about “Magno” and recommended it as a “Go”: “In Shakespeare’s time, verse and music were commonly employed in plays, lighting and set pieces were largely absent, and the charisma of the players and skill of the director were paramount. The same attributes characterize this production of Lonnie Carter’s play about a lovestruck Filipino migrant worker named Magno Rubio, even though the setting is 1930s California… Rubio’s story—and, really, that of so many migrants—is told with a captivating honesty, as scenes seamlessly glide from one to the next courtesy of director Bernardo Bernardo’s impeccable timing.

“Guitarist Vincent Reyes and choreographer Peter de Guzman help bring out the piece’s theatricality by incorporating kundiman (traditional Filipino love songs) and eskrima (martial arts using rattan sticks)… The entire ensemble is fantastic, their movements crisp and energetic, their expressions full of vivacity and their vocals beautifully harmonic. The show, at its core, has the bawdy, wonderful, put-it-all-out-there-ness of a well-done Shakespeare play.”