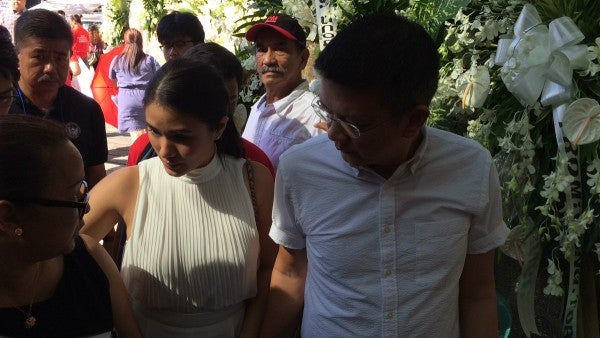 Sen. Miriam Santiago’s colorful life was remembered by her colleagues, friends and family at the necrological service held in her honor on Saturday evening at the Immaculate Conception Church in Cubao.

Actress Heart Evangelista highlighted the softer side of the senator as she turned emotional when she delivered her eulogy.

“You were my fairy godmother, my protector, my hero, my mother and my best friend,” she said in tears.

The actress said Santiago believed in her so much and she was also there for her when she needed her most.

“You made me feel like the world was just waiting for me to spread my wings and make my dreams come true,” she said.

“For indeed those were the times everything and anything is possible with you by my side holding my hand,” she added.

Evangelista recalled how the senator was so “generous” of her time to her despite everybody wanting to spend time with her.

“Everybody wanted to be with you and yet you have me so much of your borrowed time,” she said.

The two are known for their closeness, and it was also the senator who introduced Evangelista to her husband, Sen. Francis Escudero.

Evangelista and her husband had just arrived from Vietnam, where they joined President Rodrigo Duterte in his two-day working visit.

“You were my north star. Your memory will always light my path…,” she said.

She also thanked Santiago’s family: “Tito Jun, Tita Miriam’s family, thank you so much for sharing her with me. I shall forever treasure our memories together,” she said while breaking down to tears.

“For now I shall say goodbye and with a sad smile, I will say, until we meet again,” she concluded.

‘Best teacher we’ve ever had’

Senate President Aquilino “Koko” Pimentel III, a former student of Santiago at the University of the Philippines College of Law, said he remembers the senator the most as a teacher.

“A couple of days ago, I said she was the best president our country never had. But I think Ma’am Miriam would prefer to be remembered as the best teacher we’ve ever had,” he said.

As a professor, he said Santiago was “kind and fair” and challenged them to do their best as students.

When they were already colleagues at the Senate, Pimentel said he still looked up to her as a teacher, and learned from her by listening intently to her speeches.

“She doesn’t know that she’s the reason why I keep a dictionary app in my phone,” he said.

A Senate resolution honoring Santiago will be filed on Monday, Pimentel said.

“I will always remember her as a champion of women’s rights.”

Santiago’s bestfriend and roommate at UP, Zeny Lazaro, also spoke at the eulogy.

“You are alive because many love you. You will live forever in their hearts….She loves Jun very much,” she said, referring to the senator’s husband Narciso Santiago.

READ: Miriam should have been lauded when she was alive, says husband

Santiago’s brother, former Armed Forces of the Philippines chief, retired general Benjamin Defensor, was the last one to speak. He recalled their childhood and his sister’s intelligence and abilities.

“Her intelligence was strong and penetrating,” he said, adding that she was a “monster reader.”

Santiago succumbed to lung cancer on Thursday morning at the age of 71. TVJ

Miriam Defensor-Santiago passes away at 71

Miriam’s last words: ‘I accept this. I don’t want to do anything heroic’