Andi hurt by revelation about her baby’s ‘real father’

“She is, without a doubt, a good mom,” said actress Dimples Romana of her “The Greatest Love” costar Andi Eigenmann, who is now the subject of tabloid headlines in relation to the alleged “true identity” of the father of her 4-year-old daughter.

Andi’s half-sister Maxene, recently claimed in a podcast interview that Jake Ejercito is the biological father of Adrianna Gabrielle, or Ellie, allegedly based on the result of a  paternity test. Andi earlier declared actor Albie Casiño as the father.

“I cannot say much about the issue because it’s not my story to tell. Let’s just give that to Andi, but if you are to ask me how she is doing, I’d say that Andi is obviously hurt. The best thing about her is that she cares only about Ellie and how these events would affect the child, and not about what other people think of her,” Dimples said during a recent forum on Alzheimer’s and dementia, organized by producers of “The Greatest Love” (airs weekday afternoons after “Doble Kara”).

“Andi is okay. She’s a strong woman. You see, the Lord gives the hardest battles to His strongest soldiers,” added Dimples. “We were there [when Andi first heard of the news], and I think it helped that we were there. We were taping the pamamanhikan scene at that time. The team of ‘The Greatest Love’ is not just a family on the set, but also off-cam.”

Dimples said it was Sylvia Sanchez, the matriarch in the teleseries, who pulled aside Andi and talked with her. “Nanay Ibyang (Sylvia’s nickname) gave Andi advice. She whispered something to Andi and hugged her. As Nanay’s other children in the show, we had to step back a little. Andi knows we’re here for her,” said Dimples. 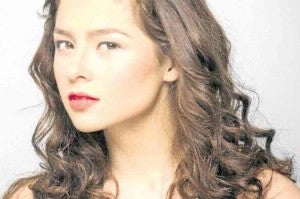 Sylvia recalled: “There was definitely sadness in Andi’s eyes, but she’s a professional so she still went to work that day and was able to deliver. I hugged her and told her not to think of anything else but her daughter because this will give her a sense of direction. I also told her to just cry it off one time and that’s it.”

The veteran actress described Andi as a “fighter.” Sylvia added: “You cannot make her do things that she doesn’t want to do. Andi is a good person.”

Sylvia, who plays a woman afflicted with Alzheimer’s in the drama program, meanwhile, revealed she could be experiencing symptoms of the illness in different degrees, and that she wanted to have herself checked.

In an interview with the Inquirer shortly after the lecture on Alzheimer’s and dementia by neurologist Darwin Albert Dasig, Sylvia said: “When Dr. Dasig talked about the symptoms, I got nervous because I know I’m experiencing some of them. As early as now, I want this detected. I’m scared of acquiring the illness.”

Sylvia, 41, said she would sometimes forget even the names of her children. She has four kids with husband Arturo Atayde, namely, Arjo, Ria, Gella and Xavi.

“I also don’t know if this is a side effect of having general anesthesia nine times,” she said.