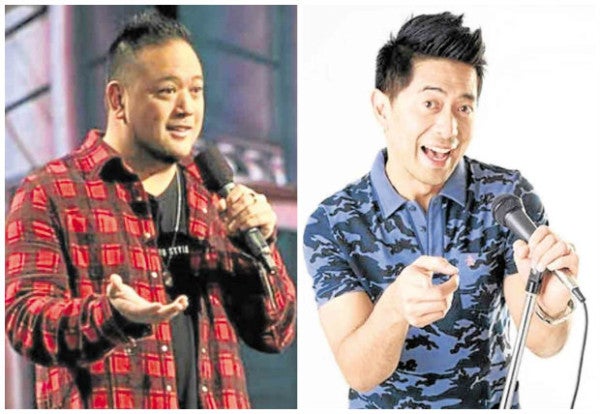 “FILIPINOS in general are more interested in you as a performer first, and [in] your material second,” Fil-Am stand-up comic Tim Tayag told the Inquirer via e-mail interview, describing how Pinoy fans can be different from other audiences.

“I adjust by trying to be more animated, and a bit more obvious with the punchlines. But for the most part, Filipino fans are just about the same as others around the world.”

Fil-Canadian Ron Josol, in a separate interview, differentiates with an analogy: “It’s like food—it’s how you prepare them for different audiences that makes it accessible for them. It’s all about the setup or how to connect with them first, so they can get the punchline.”

Audiences in North America and the United Kingdom, Josol added, are “spoiled with the amount of comedy” they can watch: “The crowds tend to have a ‘make me laugh’ attitude, whereas [others] appreciate it more and respect the art form.”

Tayag and Josol, along with Filipinos Alex Calleja and GB Labrador, are among 24 comedians appearing in the ongoing eight-part, half-hour series, “Comedy Central Stand-up Asia!” (Comedy Central, Tuesdays, 8:55 p.m.). Other talents are from India, Malaysia, Singapore and Hong Kong.

Tayag started a career in comedy in 1997 when he performed in a San Francisco bar. Eventually, he began appearing in bigger clubs and shows in various countries. He also became the host of a travel show on

Josol has been making people laugh since the late ’90s, as well. He has performed in the Middle East and in various festivals in the United States, aside from his gigs in Canada.

“I grew up in two worlds—one was in my house as a Filipino and the other was outside as a Canadian,” Josol shared with the Inquirer. “Due to the contrast, I [figured] out differences between the two, which helped me as a comedian. Because my life was different at home through food, family and upbringing, it already was a recipe for funny!”

“Basically, I got the best of both worlds,” Tayag said of growing up in the Philippines and moving to the United States. “I was able to learn the ‘Western’ style of stand-up, which is unique in the Philippines, while using local references and Pinoy sensibilities, like I’ll talk about our love for rice and how it is your downfall if you ever want six-pack abs. So, even if most of my material is in English, it’s still relatable. We have the same pains and struggles in life—wanting to be loved and getting six-pack abs.”

The comedians, both in their early 40s, consider comedy “serious business,” as it can get tough from time to time.

“It is fun if you make it big or you do it as a hobby, but in between, it’s a 24/7 business,” explained Josol. “You have to work on three things—your act, the business side, the networking side.”

“The toughest thing with winning over Filipino audiences is making it clear that I am being sarcastic,” Tayag revealed. “My comedy is an exaggeration of the truth and, sometimes, truth hurts. But we still need to explore it and think. In stand-up comedy, the audience sometimes doesn’t see the comedian as a character with exaggerated opinions. That’s where the challenge is.”

On drawing the line, or topics that are off-limits, Tayag said, “Ideally, there should be no line and an artist should be able to explore any topic. Of course, this is assuming that your main purpose is to enlighten

people through humor and not to offend on purpose. But I try to stay away from political issues, because there are many passionate opinions about certain figures. Plus, I try not to talk about things I don’t know much about!”

Josol said treading potentially controversial territory depends on the jokester: “Each comedian has his or her own limits to what they can say. What I can get away with, what I find offensive, or what I find off-limits depends on each comedian’s morals, philosophies and beliefs.”

Josol elaborated, “It’s amazing to see the world and get to stay in extravagant places, but when you’re comfortable, you can get lazy. Success breeds laziness. I get inspiration from what I hate, what hurts, what I wish, and obscure observations about life.”

Tayag, meanwhile, said that his observational humor is something Filipinos are accustomed to: “[It] usually includes singing—[something] I don’t have the talent [for]. I talk about my experiences and relate their absurdity… like Conan (O’Brien), (Jimmy) Kimmel, and other late-night show [hosts].”

Both comedians have keen observations on present-day connectivity and culture. The funniest thing about the world, according to Josol: “The world is a smaller place now. You can go anywhere in the world in 24 hours. You can talk to anyone in the world for free. I’ve been to 40 countries in a year—and they all have Starbucks, H&M and Filipinos!”

On the funniest thing about being a Filipino these days, Tayag said, “It’s funny how we are so active online, and how brave we are on social media to defend, attack and do whatever. But in real life, we’re never like that. It’s interesting how Filipinos behave—I think that’s funny in a good and bad way!”