Alicia Vikander on Michael Fassbender and their film 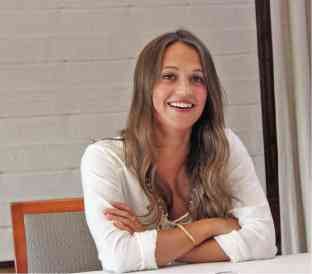 LOS ANGELES—“You always wonder if you are going to have chemistry,” Alicia Vikander said about her leading men as she starts each new movie. The actress certainly wondered about Michael Fassbender when they began filming “The Light Between Oceans.”

Well, not only does the pair have good chemistry; they fell in love on the New Zealand set of director Derek Cianfrance’s adaptation of ML Stedman’s novel of the same name.

In the drama set after World War I, Alicia and Michael play a lighthouse keeper (Tom) and his wife (Isabel), who’s recovering from two miscarriages and one stillbirth. When a baby washes ashore in a lifeboat, they raise her as their own.

Rachel Weisz also stars in the movie that recently debuted in the Venice Film Festival. Alicia, 27, and Michael, 39, made a sweet couple on the red carpet at the film’s premiere in the festival on the Lido.

The Swedish actress looked lovely in a simple linen white dress in this talk in West Hollywood, California. She was filming Wim Wenders’ “Submergence” and was set to go on location in the Faroe Islands, an archipelago located between Norway and Iceland.

“I am thrilled to go to the Faroe Islands,” she said. “I have never been there, and Wim says it’s like Mars.”

What was it like to work with Michael? Was there immediate chemistry between the two of you?

We had met in industry events, like the Toronto Film Festival and the Baftas. But the first time we really had a chat was when we started rehearsals in Wellington (New Zealand).

You always wonder if you are going to have chemistry with your coactor, especially when making a film that is intimate and emotionally intense. Yes, it felt easy from the very beginning.

Do you remember the first time you watched Michael in the movies?

I was in this little indie theater back home in Stockholm, Sweden, where I saw both “Hunger” and “Fish Tank” many years ago.

I thought he was one of the bravest actors I had seen. So, for me, to know that Derek Cianfrance and Michael were involved in this project made me really want to be a part of it.

Were you intimidated to work with him, the first time on the set?

Yeah, because you can see in his work how well-prepared he is as an actor. And also because I admired that in each role I have seen him in, it feels extremely natural … and yet, every character feels different.

I knew that with the role of Isabel and what had to be told, for this story to work, I had to fight to make people understand her—even though she makes a tough decision and maybe not the right one.

But it helped to have a challenging actor [like] Michael to push both of us. From the very beginning, he was supportive, and it was easy when I got there. 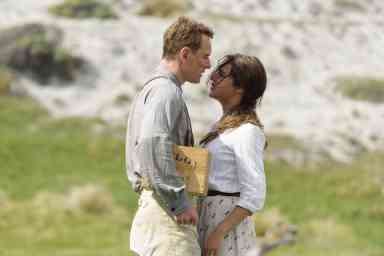 MICHAEL Fassbender (left) and Alicia Vikander in “The Light Between Oceans”

Love transforms these two characters. Has falling in love changed the way you look at the world?

Love is within everyone. I don’t know if that changes the way I look at the world. Since I was a kid, I have been surrounded by people who have given me love.

If you grow up in a home where you don’t get that, you might have a different life. By knowing love, I’ve learned how to respect other people—and give that back to others.

How did you react when you read the novel?

The book is an interesting [read]. It’s difficult to define what love is. This story is particularly about people who meet over a few days and have extremely different ideas about the world.

When they meet, they clash because they’re different from each other. Then, they connect over the fact that they have the same passion and drive to find the essence of life, humanity and love—and that’s what attracts them to each other.

They don’t have a realization of what happens when they are in it, [but] realize its impact after.

If you get a chance to work with Michael again, would you like it to be a comedy or a romantic drama?

Those are two different questions, I guess (laughs). Depending on the genre, that’ll probably [depend on its] story or the director [handling it]. I don’t make a decision based on what genre I want to do next.

Michael and I don’t have any project now—but, yes, he is one of the most brilliant people I have worked with. If we get the chance to do it again, that would be great.

Does Tom, Michael’s character, have qualities that appeal to you?

To have someone (like Tom) whom you can trust and whom you believe is kind and would support you in anything you do is someone I’d prefer to be close to.

Since the film explores motherhood, can you talk about your mother? Do you want to become a mom someday?

I am my mother’s only child. I’m very close to my parents, who divorced when I was very young. I lived with my mom. I have half-siblings on my dad’s side.

Since I was a teenager, I always wanted to have a family of my own one day.

I was only 26 (during filming), but Isabela is actually the sixth time that I have played a mother at quite a young age (laughs).

The film has optimism, especially when Lucy/Grace (the baby) shows up. In your own life, is there something that you really cherish, something you might not otherwise have?

A lot. My God, I think that’s life. There are a lot of things that I am mourning that didn’t happen or I thought I lost and some of them I probably still mourn over.

But what’s interesting about life is that if you get enough distance, you start to see what roads you went down on and how you ended up somewhere else.

What other movies are you doing?

I am heading straight to Munich to start my prep on “Euphoria” with (director) Lisa Langseth. Then, I will hopefully start “Tomb Raider” by the end of the year.

Can you talk about “Tomb Raider” and taking over from Angelina Jolie in playing the iconic Lara Croft? Do you remember when you saw it the first time?

I don’t remember the exact moment when I saw it. But I remember when it came out and I was really excited.

First of all, I love adventure movies. I grew up watching everything, from “Indiana Jones” to “The Mummy,” when I was 10 to 12. I was very happy when that came out.

I played the video game. I was thrilled because it was the first time I got to play a female protagonist. Angelina Jolie made her an icon.

When we think of “Tomb Raider,” we think of Angelina. That was something I mentioned when I heard they were going to make the film.

But I was introduced to the reboot game, which I now play. It’s quite different in style, because it’s more of an origin story. I’m meeting Roar (Uthaug, director), who has the most amazing name (laughs), later today.

Where is home for you these days?

For five years now, I have considered London as my base. I went there from Sweden when I started and just before I got the role in “Anna Karenina.” So that is where I started to meet casting directors for English-language films.