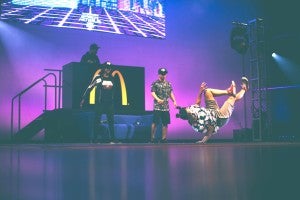 Six of the eight competing dance crews featured one to two members of Asian descent — for a total of nine — whose ethnic backgrounds included Chinese, Korean, Vietnamese, Filipino, Khazakstani, Bangladeshi and Taiwanese.

The winning team, Last Samurai, features Joseph Tran, 27, a Vietnamese American from Saint Paul, Minnesota, who has been breaking for over 14 years. Tran’s crew won $5,000 and an invitation to defend their title at B-Boy Royale 4 in 2017. For more information, visit www.mcdonaldsbboyroyale.com.

Other program highlights included the presentation of a Lifetime Achievement Award to legendary dancer/actor Michael “Boogaloo Shrimp” Chambers, star of “Breakin’” and “Breakin’ 2: Electric Boogaloo.” Taimak, the star of the martial arts classic “The Last Dragon,” presented his award.

Read Next
And then there was one
EDITORS' PICK
Smart reaffirms 5G leadership as PH’s most reliable 5G mobile operator
Don’t use military to threaten people, Robredo tells Duterte
Smart powers Liga Adarna Season 4: Race to the Top
Urban poor struggle to adapt as rising seas threaten to remap Metro Manila
Huawei’s relentless mission to bring ultimate health and wellness tracking for your fitness goals
PH logs 20,755 new COVID-19 cases; no deaths reported again due to glitch
MOST READ
Trillanes to give Robredo until last day of COC filing before finalizing presidential bid
It’s clear Marcos camp is afraid of Robredo after losing to her thrice — OVP spox
Bong Go says he is not seeking presidency in 2022
Cavite Liberal Party rep throws support behind Mayor Sara
Don't miss out on the latest news and information.