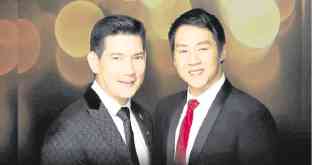 YAP AND POON. Collaborated in a concert.

We take special note of the recent “Chinito Crooners” show recently staged at The Theater at Solaire, featuring Chinoy stars Richard Yap and Richard Poon, because of the “pop cultural” diversity it promoted— which should definitely be encouraged.

All too often, our “Chinoy connection” and the Fil-Chi stars who vivify it, are shunted off into convenient cul de sacs like the “Mano Po” films and the Chinoy TV channel on Sundays.

Fact is, however, Chinoys are a more dominant and influential part of our national life, not to mention our economy. So, their contributions need to be highlighted more significantly—and more often.

Teleserye star Richard Yap’s excursion and incursion into singing similarly needs to be underscored and encouraged. On point of acting, he’s recently tweaked his image to a more youthful vibe, and expanded his range of roles to include the occasional villainous character.

But, if he really wants to make his mark as a versatile and emotionally accessible thespian, he has to get over his Chinoy reserve and circumspection, so that he can do full justice to deeply revelatory dramatic scenes.

As for Richard Poon, he seems happy limiting his performances to singing, but we hope that he will eventually get “bitten” by the acting bug, as well— like his sister, musical-theater standout Eva Poon.

We’ve worked with Eva in several musicals, most significantly in the Chinoy show we wrote and directed for Teresita Ang-See and the Chinese community’s Kaisa organization, some years ago.

What a pleasure and honor it was to be tapped to theatrically sum up our complex and textured connection—and what a joy it was to see audiences embrace the Chi-Pinoy show!

Another factor that could entice Richard to give acting a go is the fact that his wife, Maricar Reyes, is one of our best young-adult actresses, and could lovingly teach him—a thespic thing or two?