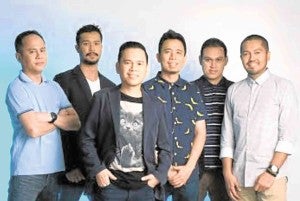 Now one of the iconic bands that proliferated in the Pinoy music scene in the ’90s, True Faith still proves it has what it takes to keep up with the present times and still slay its way to the top. After more than two decades in the Original Pinoy Music (OPM) industry, the band is still a force to reckon with and is proving this with the release of its newest music video for its single “Paano Ka Magiging Akin.”

As the band itself describes it, the song sounds very legitimately OPM and highly relates to favorite True Faith hits that’s why the single has greatly appealed to fans. The song’s lyric video had already been out on YouTube before the official music video aired last Aug. 27 on music channels. The video features model Jacq Yu and the Wow girls who have been greatly praised by the band.

Unlike any weird song-writing practice, the band simply just gets on a relaxed creative process and just puts down whatever goes in.

“Usually the process is word and melody and I let the guys in. What I do is I let them hear it and if they like it, yun na, kung anong trip namin,” lead vocalist Medwin Marfil said at a post-performance interview with Inquirer.net during their InqPop session guesting last Aug. 24.

Likewise, contrary to most genre distinctions the band usually falls in, the band would like to be labeled as “pop.”

“If you listen to a lot of music then you can always play on True Faith. We’ve done several albums na–we did this, we did electronics, we did soul, acoustic, we’ve done a lot. I like us being termed as pop kasi it encompasses a lot of things,” he said.

Being around since the early ’90s, the band skyrocketed to fame upon the release of its iconic hit “Perfect” in 1993. Back then, competition was at its height with the emergence of other OPM giants like Eraserheads, Rivermaya, The Dawn and After Image, and yet the band kept up, thanks to its signature hits such as “Huwag na Lang Kaya”, “Alaala” and “Kung OK lang Sayo.”

But now that times have evolved and the ’90s kids have aged, there is no more competition and performing is just solely an expression of passion for the craft.

“Yes, there was pressure before, Eraserheads was so big, Rivermaya was so big, you have to keep up and keep up with the sales. That caused us a lot of sleep. Now kasi it’s more relaxed. And we enjoy the status when people say that True Faith is one of the most established bands but we do not want to relax on that stature. We just want to keep on making music,” said Marfil.

With the onset of technology and modernity, True Faith wishes that Pinoy music will get back into the consciousness of the public especially the youths, which have mostly been greatly influenced by foreign music.