The Chainsmokers: You got our motherf**king backs, and we got yours! | Inquirer Entertainment
Close
menu
search

The Chainsmokers: You got our motherf**king backs, and we got yours! 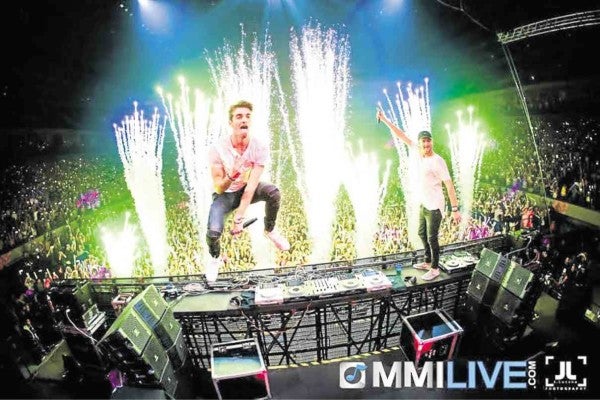 As the screens sprang to life, showing a languorous cascade of petals, the audience—a horde of tightly packed bodies itching to dance—erupted into roars. And when finally the DJ duo The Chainsmokers emerged onstage; the synths, which had been simmering for a while, morphed into a series of cadenced blasts.

It felt like an alarm or a siren, as if alerting the thousands of young revelers at the SM Mall of Asia Arena of what was about to hit them. “Don’t let me down … down,” the words blared from the loudspeakers, immediately followed by the thumping bass drop of Lookas and Crankdat’s “Game Over,” which sent ripples across the venue.

The music and energy ebbed and flowed—at times delirious like a whirring chain saw; at times leisurely and laden with slick R&B hooks, but head-bobbing just the same.

Lights pulsated in seizure-inducing pace. Fireworks crackled as anthemic climaxes led to frenetic drops. And once in a while, Taggart left the booth, so he could leap, run about, and pump up the crowd even more.

“We love you, Philippines! You got our motherf**king backs, and we got yours!” bellowed Taggart, who, together with Pall, dished out some of their biggest hits like “Roses,”  “Don’t Let Me Down,” “Kanye” and “New York City,” as well as a smattering of remixes that sampled, among others, Coldplay’s “Yellow,” The Killers’ “Mr. Brightside” and Franz Ferdinand’s “Take Me Out.”

Pall, on the other hand, stayed put for much of the concert. And while critics and other musicians usually dismiss a DJ’s job as “merely pressing buttons,” the music artist insisted that there’s more to it than meets the eye.

“The process of DJing is definitely more than that. There’s a lot of thought and effort that go into it,” Pall said in an interview a few hours before their performance. “There’s the creative process of actually making the songs, of course, and thinking of interesting ways to deliver it, make every show a different experience.” 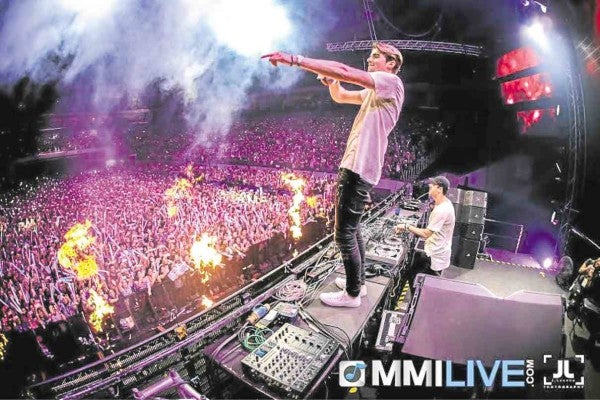 In 2014, Taggart and Pall, who formed The Chainsmokers in 2012, flew to Manila to do a gig at a posh night club. Back then, they were seen as nothing more than a novelty act, coasting on the success of its ubiquitous—if ever so slightly annoying—“#Selfie” song.

But a lot of things can happen in two years—the duo’s music matured; the writing, now more “eloquent.”

Now, they have three Top 10 songs on the Billboard Hot 100 chart, with their latest single, “Closer,” a collaboration with Halsey, reaching No. 1 just this month.

“I want to give a shout out to this country … We came out with ‘#Selfie’ before … and everyone thought we’d end up being a one-hit wonder. Well, except you, guys!” said Taggart, who’s “incredibly grateful” for all that he and Pall have accomplished so far.

But despite the success they’re enjoying at the moment, the two agreed that they still have a long way to go in the music scene.

“Our ambition hasn’t changed,” Taggart stressed. “We wake up every day, trying to put out better music.” 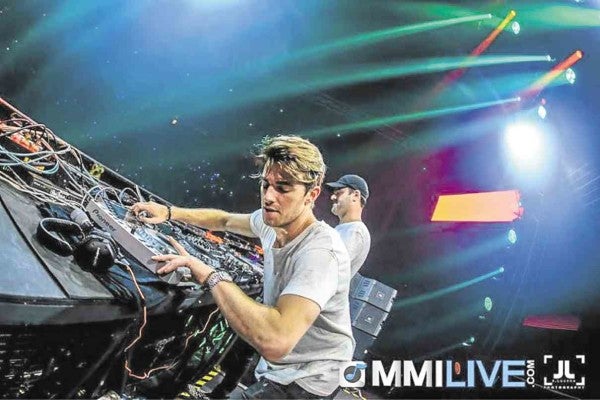