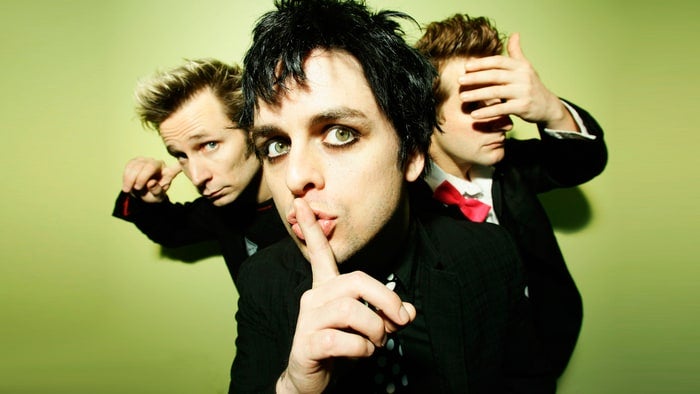 After a couple of years of inactivity, punk icons and present day key figures of modern rock, Green Day, have put out a brand new single “Bang Bang” from their soon to be released album ‘Revolution Radio’.

Their latest album aptly titled ‘Revolution Radio’ suggests that Billie Joe Armstrong, Mike Dirnt and Tre Cool are getting in touch once more with their punk-rock roots, to the decade when these humble trio were still starting out in their music career as a band. Even then, they had succeeded without coming off “cliché” in making socio-political statements through their songs with regard to certain issues prevalent then.

What is the production value of “Bang Bang” ?

I like the fact that “Bang Bang” does not sound “glossy”, “too clean cut around the edges” nor overly polished. Otherwise, that would just hurt the potential impact this single can have once it is heard by more people and especially by long time Green Day fans who have followed this band since the beginning because that specific core group of their fans would certainly want to hear the “Green Day of old” once more.

For one, “Bang Bang” sounds aesthetically right given that this is one of the more pure punk-rock sounding tracks I have heard in a long time from Green Day. Vocals wise, Billie Joe Armstrong sounds motivated here and more aggression behind his voice can be detected this time. Mike Dirnt’s bass play is right up there, too, in par and quality to their previous classic studio-releases like ‘American Idiot’. Tre Cool’s drumming is as sharp as ever with almost a marksman like accuracy in striking the skins of his drum set.

Overall, hearing standout tracks like this will convince anyone that Green Day is still in top form with a lot left in the tank.

What is the overall meaning of “Bang Bang” ?

Billie Joe Armstrong does not beat around the bush. He goes straight to the matter at hand. He sharply speaks out his mind about the increasing and alarming rate of mass shootings that are taking place in America.

The viewers of news channels are pummelled with disturbing reports of school children getting shot, innocent civilians assaulted by street gangs, and cops randomly gunned down by Islamic State sympathizers. All these have pushed Billie Joe Armstrong to compose and sing some of the most honest lyrics I have ever heard from him in years.

If you listen carefully to the track “Bang Bang” and can decipher properly the lyrics because you are updated with global events, then it will undoubtedly strike a nerve in you, too. Listening to it will make you reflect and ask: Why are so many innocent people being killed ? And yet, those who have committed these heinous and cold hearted crimes are still free and continuing with their evil ways ?

Billie Joe Armstrong has been known to never shy away from “hot” topics in his songs that touch on sensitive issues. That for me is a true and living example of the “Punk Spirit” that Billie Joe Armstrong still embodies to this very day through their songs as illustrated in Green Day’s brand new single “Bang Bang”.