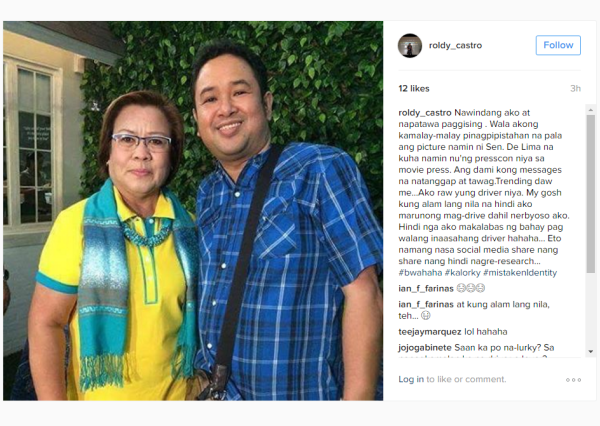 Another case of mistaken identity online.

Bashers of Senator Leila de Lima have been erroneously using the photo of the lawmaker and an entertainment reporter, whom they mistakenly identified as her driver and supposed lover.

The online attacks came after President Rodrigo Duterte’s tirade against De Lima, whom he accused of being in an illicit relationship with her driver Ronnie Dayan. Duterte also claimed that Dayan has been collecting drug protection money for De Lima.

Roldan Castro on Friday posted on his social media pages to clear his name and poke fun at the netizens who have begun using  a photo of him and De Lima in posts criticizing the senator.

READ: Was driver given this white house by senator?

(I was surprised and couldn’t stop laughing when I woke up. I didn’t know that my photo with Senator De Lima during a press conference with the movie press was already circulating online.)

The entertainment reporter said he received a lot of messages and calls about his “trending” photo.

(People thought I was her driver. My gosh. If only they knew that I don’t even know how to drive because I easily get nervous. I cannot even leave the house without a driver hahaha.)

Castro, who is the former president of the Philippine Movie Press Club, also hit people on social media for sharing content without researching.

De Lima and Castro’s photo have also been used by “hate pages” on Facebook named after Dayan. KS/IDL