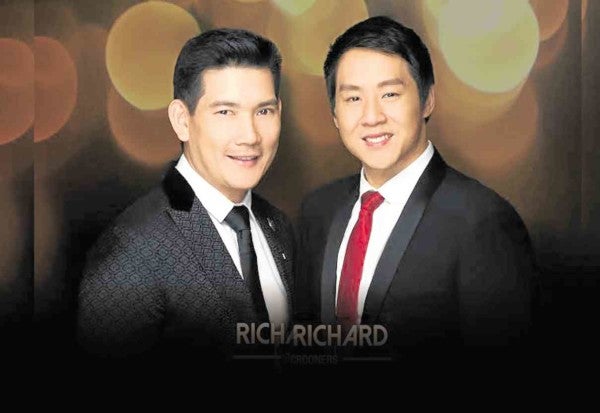 Aside from the fact that they have the same first name and are both of Chinese descent, Richard Poon and Richard Yap make for a rather unexpected pairing for a music concert: One is a recording artist focusing on jazz and standards; the other, an unlikely matinee idol in his 40s.

Even they thought it was odd at first.

“He (Yap) probably thinks, ‘I’m an actor. What am I doing here?’ On the other hand, I think, ‘What am I doing singing with a heartthrob? It’s a good kind of weird,” Poon said at a recent press conference for their coming concert, “Richard x Richard: The Chinito Crooners.”

But ultimately, they said that, music-wise, it’s their love for pop classics that bind them. “Many songs back then had meaningful lyrics. We want to put a modern twist to them for younger listeners,” said Yap, who performed “Can’t Take My Eyes Off You” with Poon, also at the event.

While Yap—a member of a glee club in high school and a band in college—can carry a decent tune, has an album, and has performed in mall shows, the actor has nowhere near the experience of Poon, who’s a tested performer, both as a solo singer and band musician (with U-Turn).

That’s why Yap is grateful that Poon has been supportive of him in this endeavor. “I’ve been offered to do concerts in the past, but I didn’t want to do it alone,” Yap, 49, related. “I remember being in a gig with him when I was just starting in show biz, about five years ago. I asked him what he does before going onstage. He sent me [a module] on vocal exercises.”

“It’s always nice to do new collaborations,” pointed out Poon, 42, who revealed that he and Poon are also planning to come up with a record that would have a similar concept. He added that there will be small doses of choreography in the show, much to the entertainment press’ amusement.