Iza Calzado gushing over meeting David Beckham in US 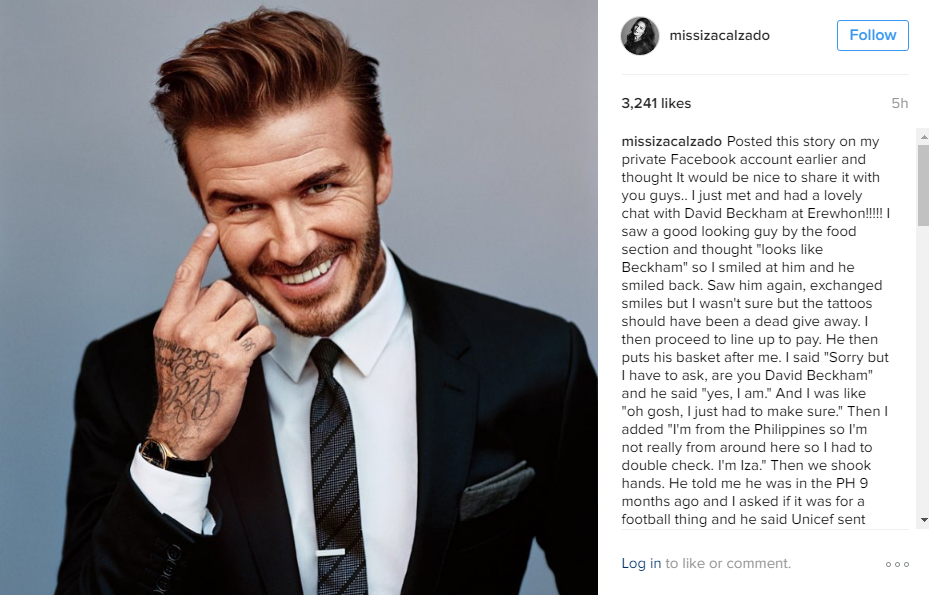 A gushing Iza Calzado took to social media to share details of her brief encounter and “lovely chat” with British soccer great David Beckham at a natural food store in the United States.

The actress said she initially thought Beckham was just another good-looking guy that looked like him, until she was able to confirm his identity in the queue to the counter.

“I saw a good looking guy by the food section and thought ‘looks like Beckham’ so I smiled at him and he smiled back. Saw him again, exchanged smiles but I wasn’t sure but the tattoos should have been a dead giveaway. I then proceed to line up to pay. He then puts his basket after me,” Calzado wrote on Thursday.

“I said ‘Sorry but I have to ask, are you David Beckham’ and he said ‘yes, I am.’ And I was like ‘oh gosh, I just had to make sure.’ Then I added ‘I’m from the Philippines so I’m not really from around here so I had to double check. I’m Iza.’ Then we shook hands,” she added.

Calzado said Beckham told her he was in the Philippines nine months ago after being sent by the United Nations Children’s Emergency Fund (UNICEF) for the victims of Supertyphoon “Yolanda” (international name: Haiyan), which she thanked the football star for. Beckham became UNICEF Goodwill Ambassador in 2004.

“Then I was called up to the cashier and he said ‘It was lovely to meet you.’ He was the nicest and even said bye to me as I was leaving and said “It was very nice to meet you.” OMG I’m dying!!!!!! Thank you, David Beckham, for being a lovely human being! I know [you] are [known] for your good looks and football skill but for me, your greatest strength is your kindness. I am now a FAN!!!!” Calzado said.

“To those asking about taking a selfie.. No, I didn’t ask for a photo. I would rather he remember our conversation and that I made him feel more like a human being rather than a piece of public property. Pero Juskoooo, grabe pagpigil ko at Sabay tili pagsakay sa uber (But my God, I was fighting my urge but I screamed when I got into an Uber [car])!!!” she added.

Read Next
Lady Gaga putting on invite-only Democratic convention show
EDITORS' PICK
Gilas out to prove Korea win not a fluke; Tab fires back at ‘lucky shot’ remark
Smart brings KCON:TACT especially 4U to subscribers from June 19 to 27
Smart celebrates all kinds of ‘#SimplyLove’ for Pride Month
SWS: Over 12M Filipinos still jobless as of May 2021
Brazil set to pass half a million COVID-19 deaths
WATCH: INQside Look with Fil-Am actress Aina Dumlao
MOST READ
The opposition’s dilemma
Minor’s death in Laguna drug raid prompts probe; 10 cops held
Underdog Dasmariñas vows to fight to the death vs Inoue
Chavit Singson joins Nationalist People’s Coalition
Don't miss out on the latest news and information.