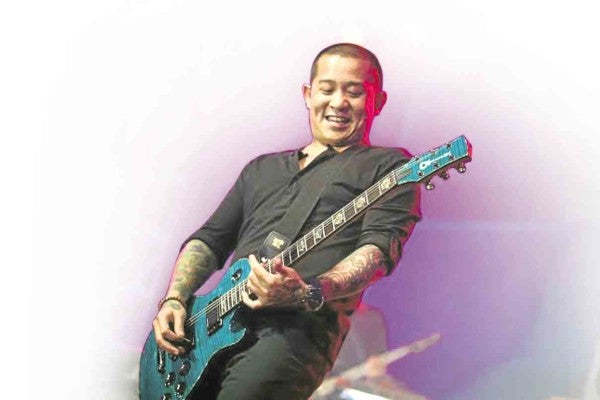 The rock band Urbandub may be currently on an “indefinite hiatus,” but not its frontman Gabby Alipe’s passion for the craft. And with the grueling days of doing tours and regular gigs behind him, the music artist can now go back to writing songs purely for his own pleasure.

“The nice thing now is that I’m doing it mostly for myself—not for work. In a way, it’s like I’m going back to basics,” Alipe told the Inquirer in a recent interview.

Make no mistake, the Cebu-based band’s 15-year journey was one heck of a ride, said Alipe.

But there comes a point that even “fun things” become routine, and ultimately, “boring,” according to him.

“I think this break is much-needed for us, as it will allow us to recharge and explore things outside our comfort zones,” Alipe said, adding that the decision to stop last year was a mutual decision among he and his band mates—guitarist John Dinopol, bassist Lalay Lim and drummer JanJan Mendoza—so that they may pursue their other personal endeavors or spend more time with their families.

Alipe is currently putting together an EP, which is expected to feature songs that are considerably different from what he had previously penned for the band, which spawned the banging fan favorites like “First of Summer,” “Soul Searching” and “Guillotine.”

While Urbandub was known for its ferocious yet melodious brand of rock, Alipe’s new music, he related, will be an interesting combination of the various musical genres and styles he likes.

“I listen to R&B, soul, hip-hop, the classics and, of course, rock. I try to incorporate these things into what I’m doing now,” Alipe said. “When you’re in a band setting, you have to consider the other band members’ tastes, too. Now there’s more freedom to do what I want.”

And as a musician, he added, it’s important that he continues to challenge himself and pose the question, “What more can I do?” “There’s conscious effort on my part to come up with something considerably different. It would be useless to take a break from the band and still create songs  with the same mindset,” Alipe said.

After Urbandub’s farewell concert in May last year, Alipe and Dinopol went on to do a couple more gigs—mostly acoustic sets—to honor commitments and to promote “Endless,” a DVD that contains a documentary on the band.

Still, every so often, he would receive messages from the fans, asking him if the whole band plans to reunite in the future.

“We’re open to it,” he said. “It was important to end things in good terms; we weren’t tired of each other and we didn’t fight, so the possibility that we can come back and hold a reunion is bigger.”