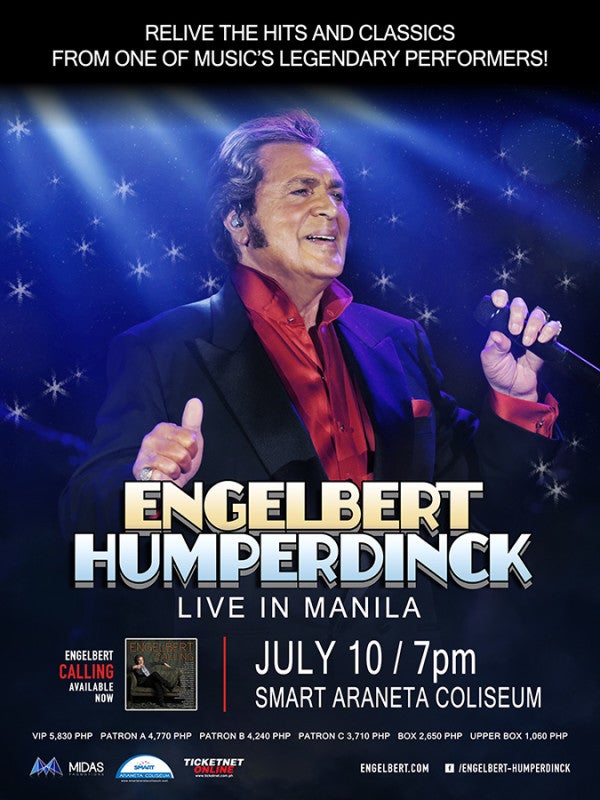 Classic pop and ballad enthusiasts are in for a treat as English singer Engelbert Humperdinck revisits Manila on July 10, 2016 for a one-night-only concert at the Smart Araneta Coliseum.

Engelbert Humperdinck has generated sales in excess of 140 million records, including 64 gold albums and 35 platinum, four Grammy nominations, a Golden Globe, and stars on the Hollywood Walk of Fame, Las Vegas Walk of Fame, and Leicester Walk of Fame. His voice has been immortalized in timeless tunes loved by many Filipinos and fans worldwide like “(Please) Release Me,” “The Last Waltz,” “Am I That Easy To Forget,” “There Goes My Everything,” “Can’t Take My Eyes Off You,” the unforgettable “Quando, Quando, Quando,” and many more.

“My mother’s side of the family had the signing voice so I must have inherited that from her. My father was a man’s man – strong, athletic, charismatic. And I like to do all kind of men things. I love sports, golf, tennis martial arts, soccer, skiing, but at the same time, yes I do appreciate women.”

Humperdinck has performed for the Queen four times, several presidents and many heads of state. He has recorded everything from the most romantic ballads to movie theme songs, disco, rock, and even gospel. He has endeared himself to fans with his sense of humor and self- deprecating jokes, and has managed to strike a new chord with a younger generation after appearing on MTV several times.

Engelbert exploded on to the music scene with The Beatles and the Rolling Stones and soon became a world icon. He became great friends with Elvis Presley and the two legends often performed each other’s songs. His first single in the charts was “Release Me,” which went into the Guinness Book of Records for achieving 56 consecutive weeks on the charts. It was No. 1 in 11 countries. The following decades saw Engelbert touring the world to sell-out crowds.

Engelbert’s music has transcended time and his voice still continues to reach out to people now – serving to transport and inspire, to embrace and to provoke feelings and emotions. For fans, his Manila concert will surely become a memorable night with a legend. ADVT.