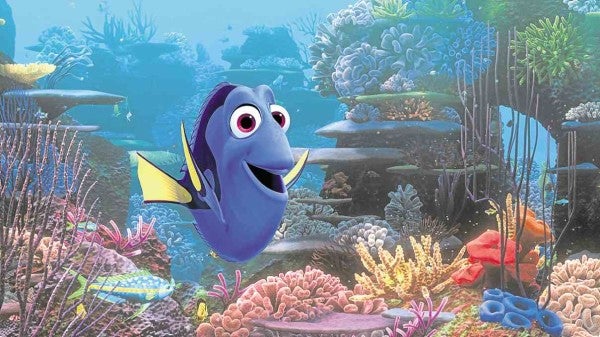 As we watch “Finding Dory,” we admire the new animated feature for achieving so much with so “little.”

Its protagonist is a small fish lost in a huge ocean, and yet the production is able to make her its absorbing visual and emotional focus, through sheer dint of felt storytelling and verve in filmmaking in general, and animation in particular.

It would have been easy for the filmmakers to think up a big, brash and complicated plot full of clangorous conflicts and colorful characters, like a number of other animated features, especially sequels of past hits.

There seems to be the feeling that, if you’re going through “old” territory, you have to up the ante in terms of production values, so viewers “don’t notice” that you’re telling a twice-told tale.

But, “Finding Dory” proves that less is indeed more, by keeping its focus on its central character rigorously clear and pertinent. Toward the last fourth of the film, many more characters  are  written into the scenario, but the focus in terms of important and pertinent participation is still kept tight.

The rigorous clarity speaks eloquently about the production’s confidence in its artists and craftsmen’s ability to keep viewers interested and involved without throwing in everything, including the kitchen sink.

Adding to its disarming sense of self-sufficiency is the “earned” value of its key thematic grace notes. They include reminders about the importance of family, friends becoming a part of one’s expanded circle of loved ones, species helping rather than competing with each other, and the fact that even “ordinary” and “flawed” individuals like Dory have something special that makes them worth helping, loving and feeling-for.

Some of these themes sound like the usual motherhood and fatherhood  clichés, but “Finding Dory” is able to make them genuinely meaningful and valuable for viewers.

Only occasionally do we feel that our heartstrings are being cleverly strummed to exploitative effect—and that’s saying a lot for an animated feature involving cutesy-wootsy, anthropomorphic creatures like this one.

On point of plotting, things also proceed swimmingly for the most part. The only time we find ourselves hesitating to go with the movie’s plotting flow is when it finally reunites Dory with her long-lost parents—and then pulls her away from them again so she can be reunited with her friends, who are being separated from her.

This forces viewers in turn to empathetically have to choose between family and friends on point of greater importance and worth—and we’re relieved when the movie subtly changes tack and enables Dory to end up with—the best of everything!

Aside from Ellen DeGeneres, who sets the film’s voice-acting pace and involvement as Dory, the actors who play the whales, Bailey and Destiny,  and the octupus, Hank,  also make their assigned characters come to “life.”