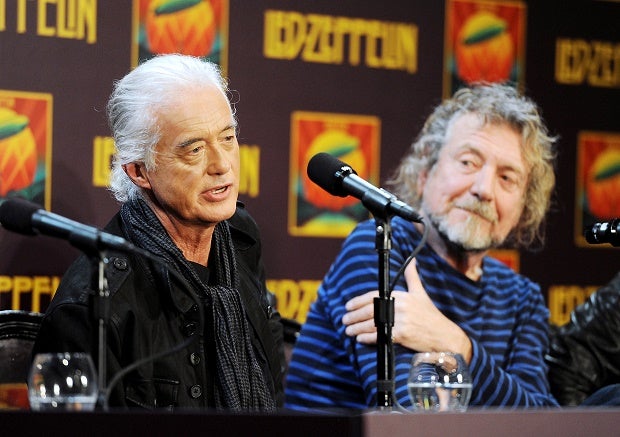 In this Oct. 9, 2012 file photo, Led Zeppelin guitarist Jimmy Page, left and singer Robert Plant appear at a press conference ahead of the theatrical release of “Celebration Day”, a concert film of their 2007 London O2 arena reunion show, at the Museum of Modern Art in New York. A federal court jury decided Thursday, June 23, 2016 that the band did not steal a riff from an obscure 1960s instrumental tune to use for the introduction of its classic rock anthem “Stairway to Heaven.” AP FILE PHOTO

LOS ANGELES — Music spoke louder than words of witnesses for a jury Thursday that decided Led Zeppelin did not lift a riff from an obscure 1960s instrumental for the introduction to its classic rock anthem “Stairway to Heaven.”

The panel had heard the faded memories of rock royalty and band members who never achieved the same fame. They were inundated with expert testimony on chord progressions and record revenues.

But before reaching a verdict that could have re-written rock history, they only wanted to hear stripped-down passages of the two songs in question.

Within 15 minutes of seeing video clips of an acoustic guitarist playing the opening to “Stairway” and a similar passage from “Taurus,” written by the late Randy Wolfe, the Los Angeles federal jurors handed Led Zeppelin a major legal victory in a debate that has divided music fans for decades.

Jimmy Page, 72, and singer Robert Plant, 67, both wearing suits and with their long hair pulled back in ponytails, hugged their lawyers. They said in statement they were grateful for “putting to rest questions about the origins of ‘Stairway to Heaven’ and confirming what we have known for 45 years.”

The trust for Wolfe, better known as Randy California, had sued the British band for copyright infringement over the short work he recorded with his band Spirit in 1968. Wolfe drowned in 1997 saving his son in Hawaii, and the trust brought the case after a 2014 Supreme Court ruling over the movie “Raging Bull” opened the door to collecting damages in older copyright suits.

The “Taurus” recording contains a section that sounds like the instantly identifiable start of “Stairway,” but lawyers for the trust had the trick of overcoming a big hurdle in copyright law.

Because recordings prior to 1978 aren’t protected by copyright, they had to rely on expert renditions of the sheet music filed with the US Copyright Office. The sheet music is typically transcribed from audio and isn’t always faithful, said Steven L. Weinberg, a copyright lawyer and musician who watched the trial.

“It’s really not a fair rendition of what the audio recording sounds like in most cases,” he said.

The renditions played in court seemed more like distant cousins than identical twins.

“I think if the jury had heard the actual recording of “Taurus” there’d have been no doubt about it,” said Michael Skidmore, the trustee who brought the case on behalf of the Wolfe trust. “They were limited to listening to, looking at a piece of paper.”

Page and Plant, who wrote the “Stairway” lyrics, said their creation was original. In several hours of charming and cheeky testimony, they described the craft behind one of the best-known songs in rock ‘n’ roll, all the while denying knowledge of one of the genre’s least-known tunes or the artists who performed it.

Plant cracked up the courtroom when said he didn’t remember most people he had hung out with over the years.

The trial took a musical journey through the late 1960s and early 1970s, when Spirit, a California psychedelic group that blended jazz and rock achieved some stardom and the hard-rocking British band shot off the charts.

Stops on the tour of testimony included Spirit shows during the “Summer of Love,” Led Zeppelin’s 1968 US debut as opener for Spirit and, finally, to a country house in England where Page and Plant described how “Stairway” was born.

Plant recalled sitting by the fire when Page first played the intro to him on acoustic guitar and he offered the start of a couplet now known to millions: “There’s a lady who’s sure all that glitters is gold/and she’s buying a stairway to heaven.”

Jurors never heard a note from Page or Plant live, but they were treated to vintage recordings of the song’s birth. Plant hit sour notes and Page played chords that didn’t make the final cut as they worked on it. When the full recording was played, Page bobbed his head and moved to the music.

The performances by both men were memorable, but they may not have been fully believable.

Jurors rejected the defense that Page and Plant would not have been familiar with “Taurus,” finding in legal speak that they had “access” to it.

Page had the Spirit record in his collection of more than 10,000 records and CDs, Led Zeppelin had opened for Spirit in their US debut and other members of Spirit testified to encounters with Led Zeppelin members.

“The reality is that we proved access, but (the jury) could never hear what (Page and Plant) had access to,” said trust attorney Francis Malofiy. “It’s bizarre.”