And the winner is… | Inquirer Entertainment
Close
menu
search

And the winner is… 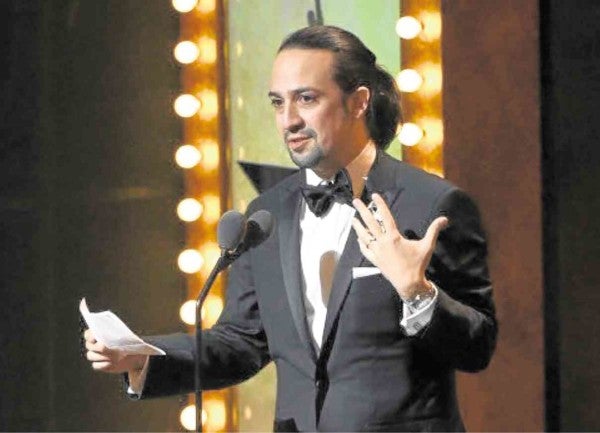 Lin-Manuel Miranda’s sonnet paid tribute to his wife, the Orlando victims and survivors, and the enduring power of love. AP

Host James Corden, himself a Tony winner (best actor in a play for the British import, “One Man, Two Guvnors”) started his opening monologue for the 2016 Tony Awards on a biting note, taking a dig at the lack of diversity at the Academy Awards, something decried by many members of the entertainment industry.

From the list of nominees alone, there were many people of color that could possibly bring home a trophy, including Filipino costume designer Clint Ramos, who was nominated—and won (Mabuhay!)—for his work on the play, “Eclipsed,” starring Oscar winner Lupita Nyong’o.

However, amid the celebration of the crowning achievements of this year’s Broadway season was a more somber undertone. On the morning of June 12, a lone gunman armed with an AR-15 assault rifle opened fire at the patrons of Pulse, an Orlando, Florida, gay bar. As of this writing, 50 people, including the gunman, are dead.

The tragedy was not ignored by the Tony Awards. Soon after the news broke out, organizers immediately tweeted a message of solidarity and dedication, saying that the show would be in memory of those who perished at Pulse.

It is no secret that many members of the LGBTQ community work as actors, singers, dancers, musicians, directors, musical directors, designers, wardrobe people and crew, so it was appropriate that this would be the awards show to address the shooting in a classy way.

Corden, with the audience at the Beacon Theater serving as a backdrop, delivered a sensitively written speech on behalf of the entire theater community commiserating with the families of those who perished, as well as those who survived the horror. “Your tragedy is our tragedy. Theater is a place where every race, creed, sexuality and gender is equal… Hate will never win. Tonight’s show stands as a symbol and a celebration of that principle.” 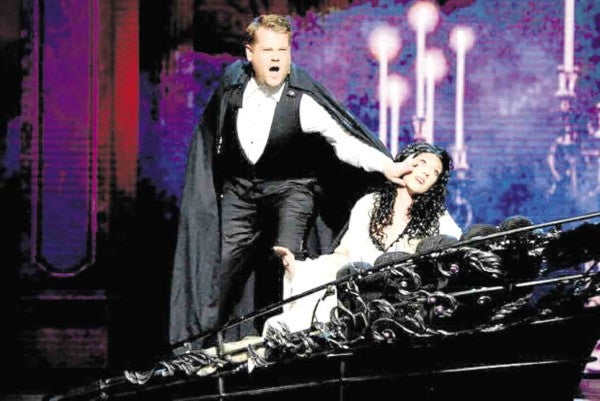 Host James Corden plays the “Phantom of the Opera” in the Tonys opening number.

My favorite acceptance speech of the night belonged to the man of the hour, Lin-Manuel Miranda, who won for best book, best musical and best score for which he wrote this sonnet that honored his wife, Vanessa, and paid tribute to the victims of the Orlando shooting:

My wife’s the reason anything gets done/ She nudges me towards promise by degrees/ She is a perfect symphony of one/ Our son is her most beautiful reprise/ We chase the melodies that seem to find us/ Until they’re finished songs and start to play/ When senseless acts of tragedy remind us/ That nothing here is promised, not one day/ This show is proof that history remembers/ We lived through times when hate and fear seemed stronger/ We rise and fall and light from dying embers, remembrances that hope and love last longer/ And love is love is love is love is love is love is love is love cannot be killed or swept aside/ I sing Vanessa’s symphony, Eliza tells her story/ Now fill the world with music, love and pride.

Watching the Tonys year after year makes me feel incredibly proud to be a part of the Broadway community. And despite the horrific events that happened only hours before, it’s heartwarming to see this amazing community come together in solidarity with and support of those who were slain, and putting on a fabulous show. Theater is indeed a transformative and healing force—and we’re all the better for it being there.

Congratulations to the winners and nominees. And to every single theater actor, director, music director, pit musician, designer, wardrobe worker and member of the crew, thank you for making this world a better place because of what you do.