Significant sendoff for the Madz 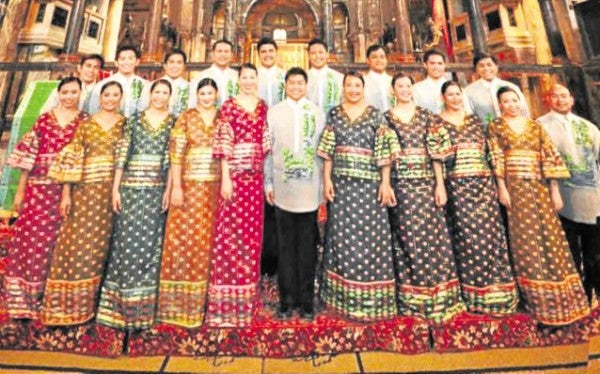 IT WAS a night of compelling choral music as the world-renowned Philippine Madrigal Singers, or Madz, performed in their sendoff concert recently at the Cultural Center of the Philippines (CCP).

Yes, the group still sings while seated in semicircle formation, but it has added skits to make the show more enjoyable.

The concert’s “Karaokilig” segment brought the house down as the choir members took turns belting out their chosen songs, the backdrop transformed into a huge monitor flashing the lyrics and scores onscreen.

Even choirmaster Mark Anthony Carpio joined in as he sang Ghost Town DJ’s “My Boo” and grooved to “Running Man,” to the delight of the crowd. The audience also participated and sang Pink’s “Just Give Me A Reason”—and got a perfect score!

Aside from the Madz’s superb blending, selected members of the group were showcased in solo numbers.

In “Padivahan,” the audience cheered as two female choristers tried to “outsing” each other in a medley of OPM classics, “Paano,” “Saan Ako Nagkamali” and “Ako Ang Nagwagi.” Other notable numbers were the Madz’s rendition of “Bukas Na Lang Kita Mamahalin” and “Pangarap na Bituin.”

The highlight of the show was the performance of the Sing Philippines Youth Choir (Batch 2), composed of gifted singers from Luzon, Visayas and Mindanao who took part in an intensive training in a music camp under Carpio.

The Sing Philippines Music Camp, held every other year, was launched in 2014 by the Madz and the CCP’s Cultural Exchange Department. It aims to help young choristers hone their music skills and help propagate choral music in the country.

Carpio shared that it was the dream of the late National Artist for Music (and Madz founder) Andrea O. Veneracion to have a “Singing Philippines”—one nation singing in harmony.

At the finale, the Madz, together with the Sing Philippines Youth Choir alumni, pulled off another surprise when they left the stage and exited the theater still singing, prompting the audience to leave and follow the singing voices echoing outside the theater.

When the audience came out, the chorale groups were in the main theater lobby’s stairs and balcony and sang The Dawn’s “Iisang Bangka,” a fitting song to end the concert, with its message of unity and harmony!