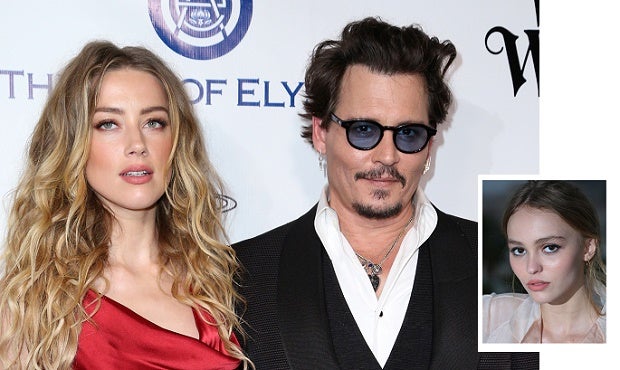 In this Jan. 9, 2016 file photo, Amber Heard, left, and Johnny Depp arrive at The Art of Elysium’s Ninth annual Heaven Gala at 3LABS, in Culver City, California. Heard was in Los Angeles Superior Court court on Friday, May 27, 2016, and provided a sworn declaration that her husband Johnny Depp threw her cellphone at her during a fight Saturday, striking her cheek and eye. The judge ordered Depp to stay away from his estranged wife and ruled that Depp shouldn’t try to contact Heard. Depp’s 17-year-old daughter, Lilly-Rose Depp (inset) defended the actor saying that he was the ‘sweetest most loving person’ she knew. AP

LOS ANGELES, United States — Johnny Depp’s daughter defended the Oscar-nominated star on Sunday, after his wife accused him of abuse and filed for divorce.

Meanwhile, Depp’s former partner allegedly said in a letter obtained by celebrity news website TMZ that the claims being made against him are “outrageous.”

Lily-Rose Depp posted a photo on Instagram apparently showing herself as a baby, with Johnny Depp holding her hands and helping her walk.

“My dad is the sweetest most loving person I know, he’s been nothing but a wonderful father to my little brother and I, and everyone who knows him would say the same,” Lily-Rose Depp said in the caption.

Johnny Depp was hit with a temporary restraining order on Friday after his wife Amber Heard appeared in court with a black eye, accusing the actor of assaulting her.

Heard, who filed for divorce in Los Angeles earlier last week and is seeking spousal support from the 52-year-old “Pirates of the Caribbean” star, says she is the victim of repeated attacks by Depp.

Heard submitted pictures to the court showing a bruise on her face that she claims was inflicted during a fight and said she feared Depp might harm her.

Actress-model Heard said in a sworn statement that Depp had been verbally and physically abusive throughout their time together.

Depp and Heard met on the set of the 2011 film “The Rum Diary,” when Depp was still in a relationship with the French actress Vanessa Paradis, mother of Lily-Rose and her brother Jack.

Celebrity news website TMZ on Sunday posted a photo of a handwritten letter that it said it obtained from Paradis, in which she describes her former partner as “a sensitive, loving and loved person.”

“I believe with all my heart that these recent allegations being made are outrageous, in all the years I have known Johnny, he has never been physically abusive with me and this looks nothing like the man I lived with for 14 wonderful years,” the note says.

The letter is signed by Paradis, dated Friday in Los Angeles.

Lily-Rose Depp, 17, recently walked the red carpet at Cannes for the premiere of “La Danseuse” (The Dancer), in which she portrayed American dancer Isadora Duncan to mixed reviews.

She is also a model and the teenage face of Chanel.