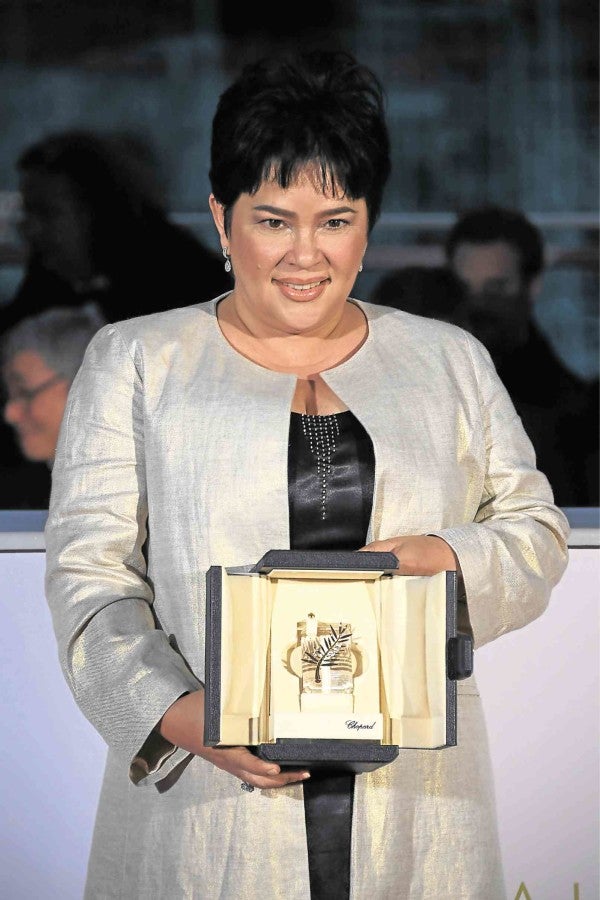 On the day of the awards ceremony on May 22, Jaclyn Jose told her daughter, Andi Eigenmann, that they better start packing. She wanted to be up early the following morning, so she could have time to buy trinkets to take home from their trip to the posh French Riviera city of Cannes.

That night at the Palais de Festivals, Jaclyn—unsuspecting, almost breathless—was declared best actress of the prestigious Cannes Film Festival, for her portrayal of the titular character in Brillante Ma. Mendoza’s gritty drama, “Ma’ Rosa.” And with it, the seasoned thespian received the best piece of souvenir she could ever have: a Palme d’Or—a golden, 19-leaf stalk set on a bed of crystal.

“I am overwhelmed! It still has not sunk in,” the actress told reporters at a recent media gathering for “A1 Ko Sa ’Yo,” the coming sexy-comedy series on GMA 7 that she will topbill (weeknights, starting June 2).

She did not have the slightest inkling that she had a fighting chance. She knew of her competition, which included the legendary French artist Isabelle Huppert.

The thought of preparing a speech seemed almost presumptuous. And so all the while, she was expecting that she would leave the venue early and quietly.

Instead, she found herself in a frenzy, being escorted from one room to another, from one event to the next. Jaclyn gave interviews, sat down at a press conference, posed for pictures. And by the time she arrived at an exclusive party for the night’s winners and VIPs, Jaclyn’s feet were so sore that she opted to just sit down.

She did, however, revel in the victors’ photo call. “The photographers were all well-dressed. It was quite dark, and all I could see were camera flashes firing from all directions. All I could hear were shouts of, ‘Down here! To your left! To your right, Jaclyn!’” recalled the actress.

Sometime in that frantic stretch of activities, Jaclyn, in a chance encounter, shared an elevator ride with American star Kirsten Dunst, a member of this year’s jury and a fellow Cannes best actress winner. “She told me that she was touched by my speech; she said it was beautiful. She also thought that me holding on to my daughter’s arm was such an emotional moment,” Jaclyn related.

What she did onstage, Jaclyn related, was fueled by pure instinct. After all, one of the biggest reasons she attended Cannes was to share that rare experience with Andi, who was also in “Ma’ Rosa.” “I did what I did because that was how I felt. It was a genuine moment,” she said. “It was all for her. Winning and sharing that moment with Andi was fulfilling for me.”

The whirlwind around her was tempered by a long plane ride from France to the Philippines on May 24.

Jaclyn was “tired but happy, nonetheless.” Happy, because she left Cannes having touched not a few people’s lives with the role she played in the movie—that of an impoverished drug dealer.

One of the most crucial scenes in the movie, she related, shows her eating fish balls—a seemingly mundane moment, at first glance.

But that scene, Jaclyn believes, was one of the driving forces behind her historic win.