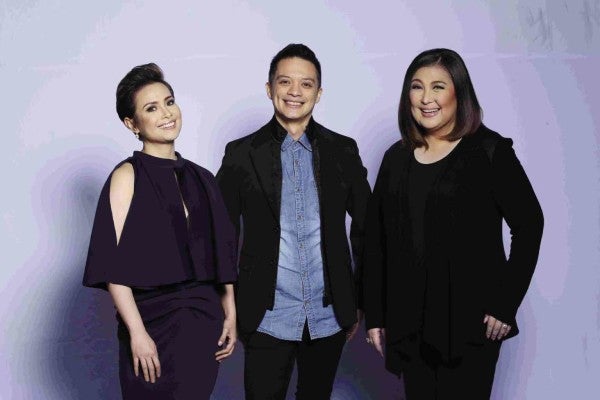 “THE VOICE Kids” coaches (from left): The author, Bamboo and Sharon Cuneta

Not just a few fans were excited by the news that Megastar Sharon Cuneta would be joining us on “The Voice Kids” as its newest coach. After weeks of speculation and some names being thrown around in social media, fans greeted the news with jubilation. My own friends, who are solid Sharonians, were very happy.

She started her show-biz career in 1978 as a 12-year-old singing the Rey Valera-penned hit “Mr. DJ,” launching her as a major radio favorite. Then began her foray into movies, the first being Sining Silangan’s “Dear Heart,” which was also her first team-up with leading man Gabby Concepcion.

She followed that with films that paired her with other leading men of the era: William Martinez, Rowell Santiago, Christopher de Leon, Miguel Rodriguez, Robin Padilla and Aga Muhlach, and has worked with directors like Danny Zialcita, Eddie Rodriguez, Olivia Lamasan, Leroy Salvador, Lino Brocka, Emmanuel H. Borlaza and Eddie Garcia. She has been heralded the box office queen for the high grosses of her movies, earning her the title Megastar.

As for my own history with her, we have seen each other in television studios and concert venues since the early ’80s, when I started making records, and thus would be a guest on TV shows including hers (the first one, “C.U.T.E.,” with her aunt Helen Gamboa, and “The Sharon Cuneta Show” on IBC 13 and later on ABS-CBN).

I must’ve been around 10; she was about 15. We would sometimes sing together, and she would interview me. And I would also be the occasional observer watching her star rise.

About a year earlier, I was invited to the premiere of her then newest movie with Gabby, “Pati Ba Pintig ng Puso?” Sharon was Jena, Gabby played Aldrin. My mom, brother Gerard and I were sitting in the mezzanine, a few rows behind where the two lead stars would sit.

The electricity inside the theater was building. Sharon and Gabby fans were in the orchestra section with fan signs and banners at the ready. Then, upon their arrival, the whole place exploded!

They stood at the edge of the balcony, graciously receiving the applause and screams. When Gabby wiped Sharon’s forehead with a hankie, even we seated behind them couldn’t help but feel that kilig that infected everyone else. The movie actually happened to be a good one, if memory serves me right.

On our second day of Blind Auditions, we filmed our opening number. We had rehearsed the music the night before, so we were already prepared. One of our floor directors, Archie, was teaching us our blocking. Sharon was laughing and making jokes while being given her instructions. I was wondering if she was actually listening.

Then, after being taught just once, she knew exactly where to stand, where to walk to, and when. My jaw fell on the floor. This was old-school professionalism, the kind that I always respect and admire in anyone who displays it. And yes, Sharonians, she sounds good.

To say that I’m thrilled she’s in our show is an understatement. I now get to say that I’m doing a TV show with her, get to bask in her reflected light—and to watch and learn. And I get to be a fan.

The queen is back, ladies and gentlemen. And I couldn’t be happier!

“The Voice Kids,” Season Three will premiere on ABS-CBN on May 28, hosted by Luis Manzano, Robi Domingo and Kim Chiu, with coaches Sharon Cuneta, Bamboo, and yours truly.