Moving up to the next level 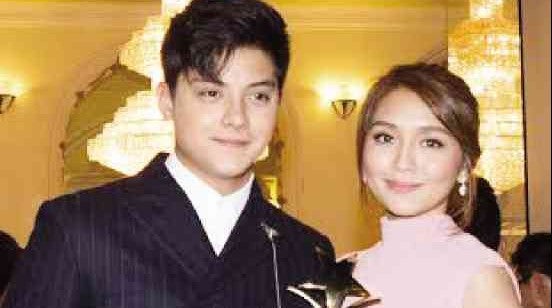 THE KATHNIEL love team is moving up a notch by way of a new film starrer, still untitled, to be megged by Olivia Lamasan.

In their last teleserye, “Pangako sa ’Yo,” Daniel Padilla and Kathryn Bernardo said goodbye to their teen idol status, in favor of a more young-adult projection.

The new film to be directed by Lamasan is expected to strengthen that key move, so the film is eagerly anticipated by movie buffs.

After all, Lamasan is known for astutely choosing dramatic material that pressures actors not just to do their thespic best, but also to level up and come up with more insightful and complex portrayals.

Some stars chafe and complain about being put through the thespic wringer by the “pushy” director, but are later effusive with their praise and gratitude, especially when their “intensified” performances win awards!

Also leveling up are KathNiel’s rivals, Maine Mendoza and Alden Richards, whose similarly fave AlDub love team is starring for the first time in the film they’re currently shooting in Italy.

The fact that this is their first solo starrer makes it a big “event” movie, but we hope that director Michael Tuviera will also make sure that it’s a really good motion picture.

If it turns out to be not just a popular but significant film, it would propel Maine and Alden’s separate and shared careers to greater heights.

On TV, upward stellar movement is similarly evident in the career of Aicelle Santos, who is now seen daily on “Eat Bulaga,” and has even been given her own hit “musical-game” portion, “Traffic Diva.”

Aicelle first became popular in musical theater, so we hope that she will use her “heightened” fame and crowd-drawing clout to make other original Filipino musicals more popular and supported by the general audience.

This dovetails into our “next level” oration for the hit Filipino musical, “Rak of Aegis,”  which has just announced its unprecedented fifth run, with new songs added, plus some significant cast changes—which should make it an even better show.

If you haven’t seen it yet, make sure you catch it this time around at the Peta Theater!

In the field of music, the current star in the making is Darren Espanto. He first made his mark as a finalist on “The Voice Kids,” where his superior singing and dancing abilities won him many fans, even if he didn’t win the top plum.

After the search for the promising child singers, some other finalists had a hard time sustaining their incipient careers, but Darren remained visible and popular.

When he went into recording, his discs sold well, so a new market opened up for him.

More recently, Darren has been repackaged—no longer as a child singer but as a tween and teen sensation. We’ve even heard him described as a “total performer,” which prompts us to surmise that he could be in the process of being positioned—as a young Gary Valenciano?