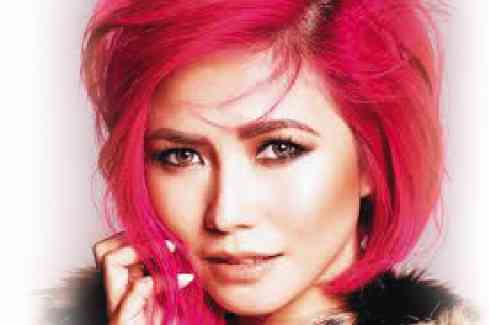 This was Yeng Constantino’s reaction upon learning that she had landed her dream project.

Yeng was recently chosen to sing a bonus track for the original soundtrack of the animated flick, “The Angry Birds Movie,” which is based on a popular video game of the same title. She recorded a bubbly, upbeat song, titled “Wonderful Life (Mi Oh My).”

“I have never been this happy—and I’m very content with my life right now,” she told reporters at a press conference for the concert, “The Divas Live in Manila,” which is slated for November.

The pop-rock artist, who is known for her guitar-driven, Filipino compositions, has every reason to feel elated and blessed.

On top of her usual gigs and TV stints, Yeng landed the project via Warner Music Philippines, which contacted the singer’s label, Star Music.

“They were looking for an Asian artist for the OST. My record label submitted suggestions and, for some reason, I was selected. It was surprising because most of my songs are in Filipino,” she recalled.

She had known about the said project for a while, but opted not to disclose it immediately to her fans, for fear of jinxing it. “It has happened before! In the past, I have experienced sharing news about my career that didn’t push through—and it was embarrassing!” Yeng explained.

“This time, I decided to keep it to myself first… If it was for me, then it would happen, I thought. And if not, I hope I would not get too heartbroken,” said Yeng, who described being part of the movie soundtrack an honor, as it also contains songs recorded by the likes of Blake Shelton, Demi Lovato and Imagine Dragons.

While some female celebrities willingly choose to slow down after getting married, Yeng’s work load has pretty much remained as packed as it was when she was still single.

According to the singer, she has been so busy that she and her nonshow biz husband, Yan Asuncion, could not go on dates as often as they would like.

“But this is the kind of busy we want. I work almost every day, and I look forward to the different projects. I want to make the most of my stay here in show biz,” she added.

The singer-songwriter said she is very fortunate to have someone who is understanding of her job’s nature.

“It is a good thing that he is such a kind person,” said Yeng, who makes up for lost time with Yan by bingeing on various television series. “We just sit on the couch and watch!”

Last year, not too long after she and Yan tied the knot on Valentine’s Day, the singer related that she was not in a rush to have a baby—a mindset she maintains to this day. The couple initially intended to try for one next year, but decided to hold it off a little longer.

“We want to continue saving up money, and maybe get our fill of traveling in the meantime. Then, we will have a baby—that is the dream,” said the 27-year-old musician, who got her start in the industry by winning the reality talent search, “Pinoy Dream Academy,” in 2006.