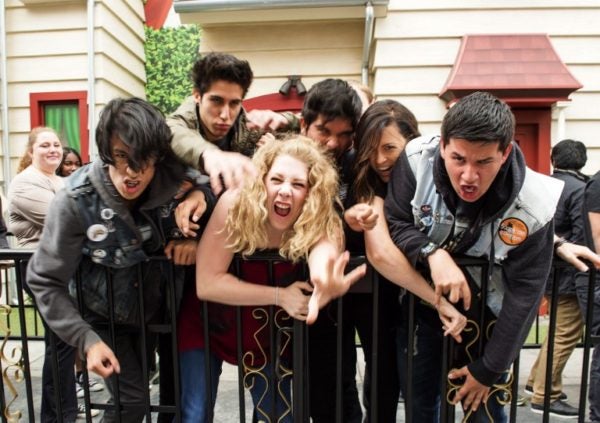 Candidates act for the camera as they wait to perform in front of a jury at “The Walking Dead” Casting Call Auditions for the future Walking Dead attraction at Universal Studios Hollywood, in Universal City, California. AFP PHOTO

LOS ANGELES—Universal Studios said Wednesday it would mark Independence Day by freeing its horde of undead onto an unsuspecting Hollywood public, offering a first look at its new “Walking Dead” attraction.

It is the latest tie-in in a burgeoning entertainment industry offshoot that has seen dozens of theme park attractions based on movies and TV shows spring up across the United States in recent years.

Universal, in southern California, released a behind-the-scenes video showing the making of its “walkers” and confirmed a July 4 opening date for the walk-through attraction, which recreates scenes from the record-breaking AMC show.

“We’re getting the chance to utilize molds that were created specifically for the show and translate them into parts of the attraction,” series executive producer Greg Nicotero said.

“We’re creating animatronic walkers that guests will be able to see. It’s never been done before. It’s one-of-a-kind, state-of-the-art and I can’t wait.”

The experience combines real-life actors with animatronics to recreate the lumbering monsters, including the iconic cut-in-half zombie from the pilot, dubbed “Bicycle Girl” by fans.

The attraction follows the opening of “The Wizarding World of Harry Potter” in April, 15 years after the boy wizard’s last big-screen adventure.

READ: Universal Studios tickets sell out for the opening of ‘The Wizarding World of Harry Potter’

Together with the recently introduced “Despicable Me Minion Mayhem,” the award-winning “The Simpsons” park area and “Transformers: The Ride-3D,” the attraction sees Universal partnering with Hollywood for a merchandising merry-go-round to rival Disney’s.

Meanwhile, Warner Bros. is opening its Los Angeles studio lot to offer fans a sneak peak at authentic props, costumes and even a prison cell set used in its hotly-anticipated summer blockbuster “Suicide Squad” more than two months ahead of its release.

“DC Universe: The Exhibit” — an homage to origins of DC Comics that features the outfits worn by Margot Robbie and Jared Leto in the movie — opens on May 24.

The attraction includes Batcave props from Ben Affleck’s first outing as the Caped Crusader in “Batman v Superman: Dawn of Justice,” which has made almost $870 million worldwide.

“Since 1934, DC Comics has built a legacy of creating the world’s greatest superheroes and super-villains,” said Danny Kahn, head of Warner’s studio tours.

“DC Universe: The Exhibit gives you the chance to explore the world of these characters from their first comic book appearance to our latest feature blockbusters.”

The studio previewed the attraction for the media on Wednesday, inviting along special guest Gene Simmons, the Kiss bass player and vocalist, who is an ardent comic book fan.

“I grew up at a time when comic books were kids’ stuff and looked down on,” he told reporters. “Guess what? We win. The geeks win.”