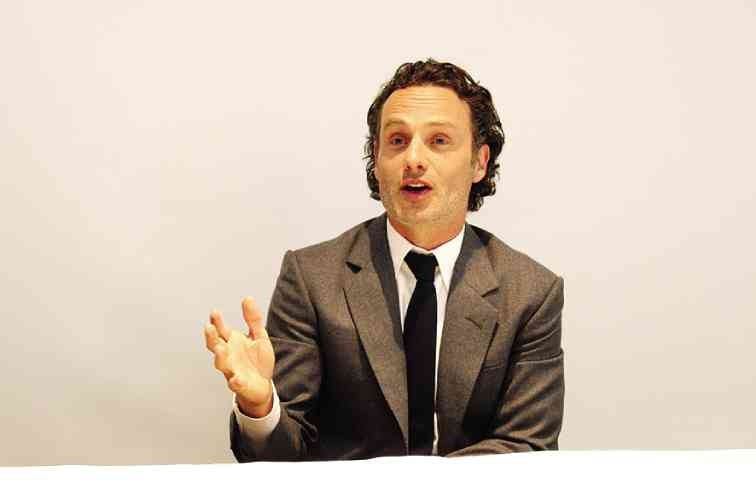 The British actor gets all sorts of “frivolous fan mail… in the zombie, kick-ass, Rick Grimes-for-President area,” which he finds “astonishing.” RUBEN V. NEPALES

LOS ANGELES—Before proceeding to a meeting room in the Four Seasons Hotel for our recent interview, Andrew Lincoln dropped his three bags with the bell desk.

The actor, who plays Rick Grimes in “The Walking Dead,” was on his way back to Georgia to start shooting Season 6 of the series created by Robert Kirkman. “I have to carry three bags and start seven and a half months of being Rick Grimes again. One of the bags was full of fan mail.”

What’s in the other two? “My machete and cowboy boots,” the London native said with a laugh.

Below are excerpts from our chat with the 41-year-old actor:

Robert Kirkman just signed a first-look deal with Universal. The news excited many fans because that could be one step closer to a movie version of “The Walking Dead.”

That would be amazing. It’s something we’ve been talking about and dreamt of because it would be cool to see some snow. We were all going, just not to have to film in Atlanta where it gets to 100 degrees!

What would be amazing is that you can play with form, time and chronology and maybe also rediscover characters who are no longer in the show. Certainly, with that format, you can do something very interesting and ambitious.

In the meantime, will you be watching the spin-off series, “Fear the Walking Dead”?

I am so excited about it. We are still going to be in our sort of hell, still fighting zombies. But it’s a companion show. It sounds like a brilliant concept. I wish them the very best of luck. 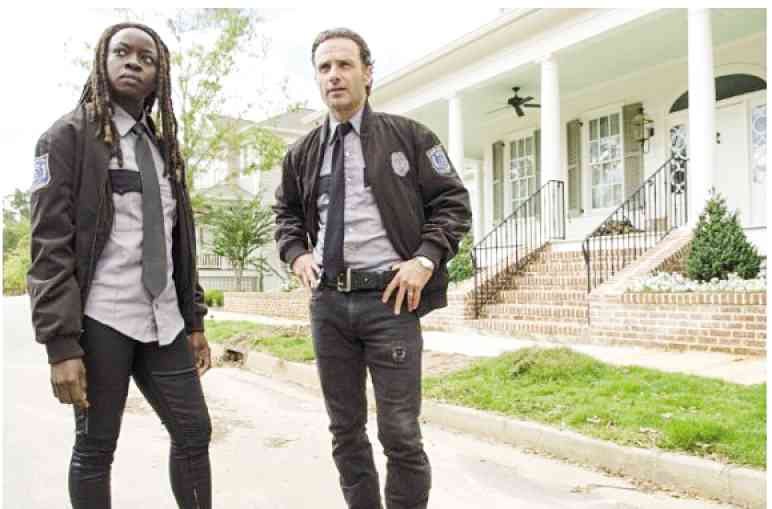 Back in uniform: Danai Gurira as Michonne and Lincoln as Grimes, are constables in new safe haven Alexandria.

What’s coming up in the series?

I haven’t been in the writers’ room. I am the last cast member to speak to Scott Gimple (showrunner). I will have breakfast with Scott tomorrow and he will tell me whether or not I could get bitten this season. Everyone else seems to be thrilled by the outline.

Generally, what happens is that I go to the writers’ room and ask Scott, “What is the theme for this season and, do I die?” He comes up with the elaborate theme. I hear rumors about how we are starting this season and it sounds incredible. But I can’t say anything.

Do you read your fan mail? And what kind of stuff do fans write to you about?

I read a lot of them. I spent a lot of my last two weeks doing that. It is getting complicated because there’s a lot more fan mail coming now. It’s occupying a lot of my e-mail. But the stories (in the fan mail) are brilliant. What the fan mail does is, it’s fuel for the cast. It galvanizes us and gets us ready to tell the story again. It rejuvenates my enthusiasm and responsibility for the show.

There’s certain frivolous fan mail which is very much in the zombie, kick-ass, Rick Grimes-for-President area, which is astonishing.

But then there are incredibly moving and touching mail about triumphs, sadness, grieving and how important continuing the show is, in people’s lives. That’s what I always hoped for when I became an actor—that you would do something that people can escape to, find identification with and excitement in and be able to talk about it in bars, restaurants and workplaces.

The other thing that has been incredible is fan mail from China and Japan. I keep getting different handwriting and postage stamps from different countries. It’s very impressive that people want to take the time to write us. 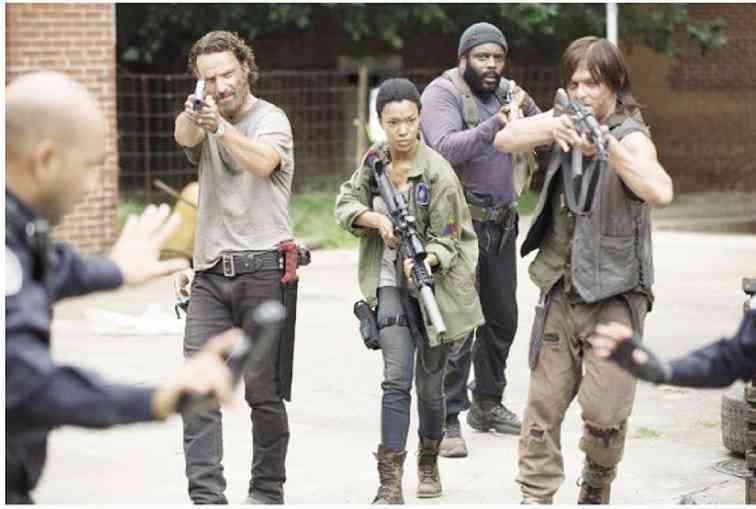 The series’ battle-hardened and weary crew (from left): Andrew Lincoln as Grimes, Sonequa Martin-Green as Sasha, Chad L. Coleman as Tyrese and Norman Reedus as Daryl

Do you answer all of them?

Yes, I do and sign them. Otherwise, that would be cruel (laughs). That would be weird, wouldn’t it, if I just read them?

You must have read weird ones, like the ones about Rick running for president.

Norman Reedus gets all those interesting, bizarre and downright astonishing fan mail. I seem to get fathers and sons, scouts and lovely ladies being respectful because they know my wife (Gael Anderson).

How long can a show like this go on? I don’t know how many more of you could die…

These are questions I am sure are being asked in the writers’ room. I think that, as long as there is an emotional impact with each death, then we have a show. It’s that simple. That is why we are still here—this is why we are still talking six years down the line. If we don’t have an emotional impact and if the audience and the fan base are not engaged emotionally with these characters, then we don’t have a show.

Well, hopefully, we’ll have the show for quite a while.

E-mail the columnist at [email protected] yahoo.com. Follow him at http://twitter.com/nepalesruben.