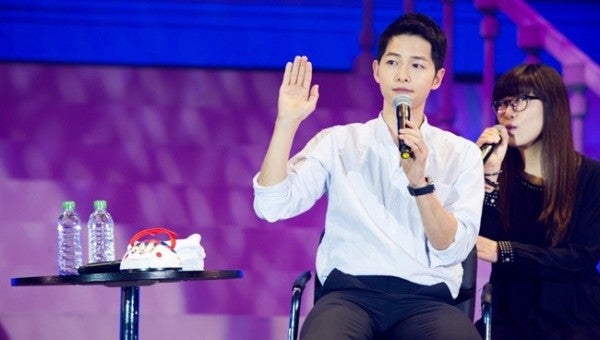 “Descendants of the Sun” star Song Joong-ki flaunted his never-ending friendship with Lee Kwang-soo, during his Beijing fan meeting, Saturday.

After a short word of hello, Song Joong-ki talked about how he lacks the skills to use social networking apps such as Weibo or Instagram, also mentioning Lee Kwang-soo. “I‘m bad at using these apps but Kwang-soo can. He will certainly provide all the latest updates of me so you can talk to him if you have any questions,” he said with a smirk on his face.

During a Q&A session in the middle of the event, Song was asked to choose the essential things that he would bring on a trip. Without hesitation, he answered “Kwang-soo.”

“I need someone to pay for the food… Just kidding! He’s a very, very close friend so if we ever have time we should definitely go on a trip together,” he added.

Before the end of the fan meeting, he succeeded in making his fans burst into laughter when given the dilemma of choosing between Lee Kwang-soo and K-pop girl groups. The crowd went crazy as he answered “Not Kwang-soo. I like girl groups more!”

Song is currently visiting various Asian countries as part of his 2016 Asia Tour, following his surge in popularity through the drama series “Descendants of the Sun.”