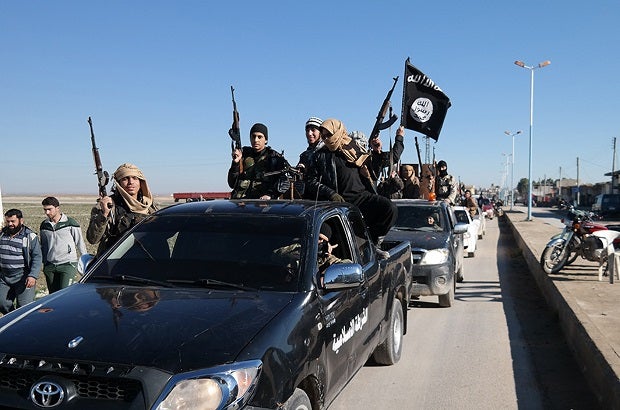 A fake terror attack that featured actors wearing ‘ISIS-like’ clothing and waving a black flag similar to that used by the terrorists, panicked guests at a hotel in France that hosts Hollywood stars and attendees to the Cannes film festival. (Militant website via AP)

The publicity stunt, by a French internet company aimed at the super rich, saw a speedboat full of men in helmets and military style uniforms attempt to storm the dock of the five-star Hotel du Cap just around the bay from Cannes.

Guests said the men were dressed as an “ISIS-like” militia group, referring to the Islamic State group which killed 130 people in a night of attacks on Paris six months ago.

Their inflatable speedboat also flew a black flag similar to the one used by IS.

Chillingly, the stunt happened on Friday, the first Friday the 13th since the bloodshed in Paris last November.

American publicist J.R. Savet, who was dining on the terrace with Vanity Fair editor Graydon Carter when the boat approached, said guests were shocked.

“Someone screamed and people jumped out of their chairs and started moving quickly to the swimming pool area. It was pretty scary,” he told the Hollywood Reporter.

Cannes has been on high terror alert for the 12-day film festival, with a warship moored in the bay and snipers posted on hotel roofs.

Oraxy, the Paris-based internet company that organized the stunt, has not yet replied to AFP requests for comment.

It describes itself on its website as “the world’s first private global marketplace reserved… for Ultra High Net Worth Individuals.”

A police spokesman told AFP that the men involved in the stunt had earlier tried to breach a sea exclusion zone around Cannes but had been repulsed by the authorities.

He said that the men then tried to land at the hotel. Paramilitary gendarmes seized the boat, but the men were not formally arrested.

“These men know that they have really overstepped the mark and today they feel ashamed,” he added.

A justice official told AFP that those behind the stunt were “likely to pay very dearly,” and would be prosecuted for breaking maritime rules and for inflicting “psychological trauma”.

The authorities were also investigating who owns the boat and rented it out, he said.

The speedboat had earlier buzzed the yacht of Hollywood legend Steven Spielberg, the “Seven Seas”, and another owned by Russian billionaire and Chelsea football club owner Roman Abramovich.

The Hotel du Cap — also known as Eden Roch — on the ritzy Cap d’Antibes, refused to comment on the incident or say which stars were in the hotel at the time.

The hotel will be the venue for the amfAR AIDS research fundraiser on Thursday, one of the most glamorous annual celebrity parties outside of Oscars night.

This year’s event for the charity, founded by the late actress Elizabeth Taylor, will be hosted by Hollywood stars Sharon Stone, Adrien Brody and American pop star Katy Perry.