LOS ANGELES—“I thought you said, ‘You have the most beautiful arse in the film,’” Michael Fassbender quipped, grinning ear to ear. He was talking to us via Skype in Sydney, where it was evening, while it was late morning where we were—in London.

Michael, looking fresh and relaxed in a white shirt and black jacket, was enjoying a bottle of beer. The man has always been engaging in previous interviews. But today, even via Skype, Michael—smiling broadly on a huge monitor screen—was even more charming and humorous.

The question was, can he talk about the beautiful arc of his Erik Lehnsherr/Magneto character in the “X-Men: Apocalypse” story? Arc, not arse. Sorry to disappoint those who thought Magneto is exposing his behind in director Bryan Singer’s latest installment on the mutant superheroes.

Here was Michael’s “serious” reply: “It was a side of the story that always interested me when I started with ‘X-Men’—the idea of this Magda (played by Carolina Bartczak) and Erik having a family life. Simon Kinberg (writer-producer) and I were on a plane heading to Russia to open ‘Days of Future Past.’

“I didn’t read comic books as a child or teenager. But there was this story about Magda that I would always come back to when I got the part, and I was doing research. I started looking into this girl character whom he met in the concentration camp.

“They fell in love and had a family. This idea that the townspeople formed a mob and burned down their house, and he lost his family—I always thought that was a big deal in this story and why he became who he is.

“Simon and I were like, wouldn’t it be cool to see Magneto in a family life? And the fact that he’s left all this world of terror behind him. He has hung up the cloak and helmet. He’s not using his powers anymore. He’s trying to live a normal life.

“And wouldn’t it be interesting if he was working in a factory? Something to do with metal, but he wasn’t using his powers, just like manual penance. Simon wrote that. It also helps with the idea of Magneto following someone (Apocalypse, played by Oscar Isaac). I found that strange. It seemed to go against Magneto’s nature.

“So to have him in this vulnerable state when Apocalypse, the mutant god, arrives, Magneto would have nothing to lose. All his faith and whatever trust he had in humanity is gone at that point, so he joins this apocalyptic crusade.”

The Germany-born, Ireland-raised actor, one of the finest of his generation, said he understood the mutant characters’ feelings of being different and alienated from society. “Absolutely,” he remarked.

“Those years of going through puberty can be confusing and an insecure time. Music was my outlet. Heavy metal primarily allowed me to head-bang my troubles away (laughs). I felt like, in music, I found a home. Music was a way to release tension, fear or any of those things. Then, acting came after that.”

The metalhead wannabe tried to form a band in the small Ireland town where he grew up. But Michael ended up with only two members—the other guy also wanted to be the lead guitarist.

“I played pretty badly but pretty intensely for two to three years,” he said. “I had dreams of becoming a lead guitarist in a heavy metal band, but I wasn’t good enough.” 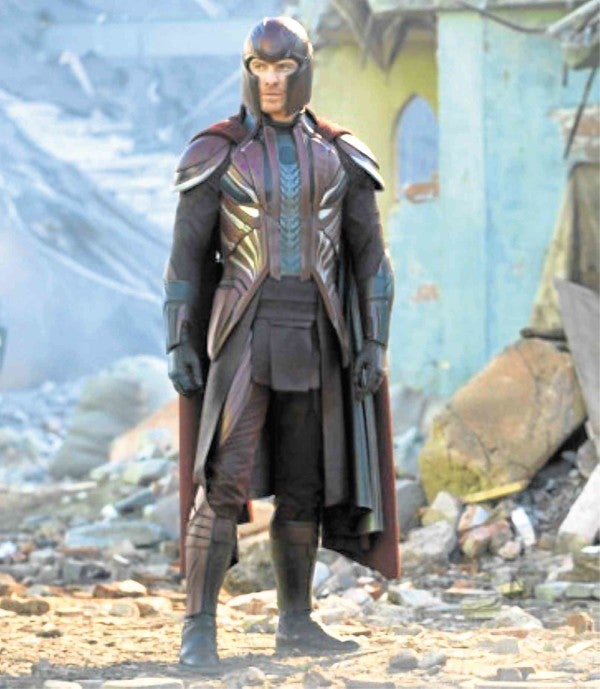 AS MAGNETO in “X-Men: Apocalypse”

On a suggestion that he enlist his “X-Men” castmates, several of whom play instruments, to make his rock-star dreams come true, Michael laughed and commented, “That’s right. The mutants are going on the road—the Metal Mutants!”

A couple of days earlier, Justin Kurzel, who directed Michael in “Macbeth,” showed us a sneak footage of “Assassin’s Creed” at The Soho Hotel London. While the film, produced by Michael himself, is set in the same world as Ubisoft’s popular “Assassin’s Creed” video game, it isn’t a direct adaptation.

Asked if he enjoyed being high above ground for those stunts, Michael, breaking into yet another mischievous smile, replied, “I don’t like spending time in a harness, if I’m being totally honest. I was up there for a long time. I’m not scared of heights, but I’m not crazy about them, either.”

So why does he take on a movie like “Assassin’s Creed,” where he’s often dangling up in the air? “Because I’m a masochist,” he cracked with a laugh.

“Heights don’t freak me out as long as I don’t think too much.

“I try and do the same when I’m up in one of those towers. It’s a funny thing actually, because when we were up in the buildings in Valletta, Malta, I wasn’t really that scared of heights. But when we were in the studios, and we built this tower, which was a fraction of the height of the real buildings, it freaked me out a little bit. I don’t know what that is.”

On Callum/Aguilar, Michael said, “We developed this character from scratch. It wasn’t somebody who had been in the game. We wanted to have a character who was very isolated and didn’t belong to something. He’s been institutionalized.

“He only looks after himself, and we thought that would play quite interestingly against the regression character who is definitely part of a creed, a brotherhood. He has given his life to that and is all about following that line of faith.”

“There are going to be great sets and aliens coming out of people,” Michael promised about Ridley’s “Covenant,” the second chapter in a prequel trilogy that started with “Prometheus.”

“It’s amazing to watch Ridley work. I try to soak up as much knowledge as I can from him, because having worked on this kind of films a few times and having seen how many moving parts there are, how many people work on the set and how many departments need attention and the language, he’s an absolute master.

“The sets are fantastic. Again, the most impressive sets I’ve seen since ‘Prometheus,’ which was the original setting. It’s a fantastic mixture of high-end technology and primitive elements. The way that I can explain it is the same way that Ridley did ‘Blade Runner.’

“You have this futuristic world where people are eating noodles, because that seems to be the cheaper food and something that will fill you up. But it’s also something that harks back to the past. The weaving of those two things—past and future—together makes for an interesting world that we can aspire to, but also recognize something in it.”

On what he packs when he travels from his London home to places like Sydney, Michael said, “I don’t think I have anything other than the script that I’m working on. I take a computer, because I use that to help with work. And my toothbrush (laughs). I don’t have anything that I hold onto that much, to be honest.”

Michael will be seen next in Derek Cianfrance’s “The Light Between Oceans,” opposite Alicia Vikander (whom he is reportedly dating), Terrence Malick’s “Weightless,” Adam Smith’s “Trespass Against Us” and Tomas Alfredson’s “The Snowman.”

In the meantime, “Apocalypse” is his last “X-Men” movie, contract-wise. “I signed up for three, so this is the end of the contract. We’ll see what happens next.”