Alvin Anson comes into his own | Inquirer Entertainment

Alvin Anson comes into his own 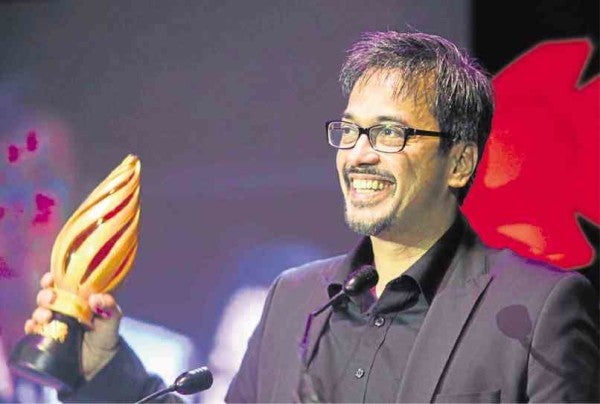 The last time we talked to Alvin Anson, he was feeling bullish about his acting career.

He excitedly shared that he had two movies just waiting to be screened, the Sinag Maynila indie fest entry, “Expressway,” and “Ang Pag-ibig Ko’y Ikaw.”

Alvin has been acting in films since the ’90s, but hasn’t attained the stellar stature he deserves, so his “retroactive” excitement about his two new starrers was perfectly understandable.

Having watched him grow up both in and out of camera range, we felt that Oscar Moreno’s scion should have gotten his rightful share of the stellar spotlight.

For some reason(s), however, it’s taken a while for Alvin to come into his own as an actor, despite his obvious “K” in terms of looks, talent and temperament.

Well, all that is in the past. In turns out that Alvin had good reason to be excited about his career prospects this year, because he won his first best actor trophy for his lead portrayal in Ato Bautista’s “Expressway” at the recent Sinag Maynila tilt.

In the “dark and deadly” urban drama, Alvin plays a gun for hire who “needs to do” one last assignment before he retires.

We hope that this long-delayed acknowledgment of Alvin’s thespic edge and “cred” will result in the TV-movie industry’s “rediscovery” of his stellar worth—and that his second starrer for 2016 will be similarly significant and acclaimed.

So many commercials and product endorsements are telecast these days that sponsors and the ad agencies they hire have to work much harder to make viewers notice and buy their products and services. To this end, all sorts of production and psychological techniques are used.

This season, a relatively more innovative technique of choice is advertisers’ penchant for coining new words or phrases to make their campaigns stand out and underscore the uniqueness of their products, so viewers will remember their brand names when they’re at the supermarket or department store.

Many of the innovative pitches are clever or cute plays on words, the better to catch viewers’ and prospective buyers’ fancy.

How to make them prefer one shampoo over many others? Describe it as “haba-mazing,” or promise that it will make users’ hair “haba-habango.” How to boost the “buy-ability” of a chocolate drink? Add to its “energetic” appeal by naming one of its ingredients or properties “Active Go.”

Another created ingredient or element for a different product is a play on words, in Latin yet—“Lacto Bacillus Protectus!”